The development of a strong high pressure system (1055mb+) across northern and interior Alaska sent temperatures into a dive in Fairbanks after snow ended on Thursday, with a drop from +22°F to -28°F in 24 hours.   Today the temperature struggled to get above -20°F at the airport.  It seems as if temperatures have been on quite a roller-coaster so far this winter, as seen in the chart below, but in fact the variability is not at all unusual.  Since November 1, the standard deviation of daily temperature anomalies has been 12.6°F, compared to the 1981-2010 normal of 13.3°F for the same period on the calendar.  Perhaps the volatility seems unusual to me because last winter was one of the least variable winters on record as far as temperature in Fairbanks is concerned. 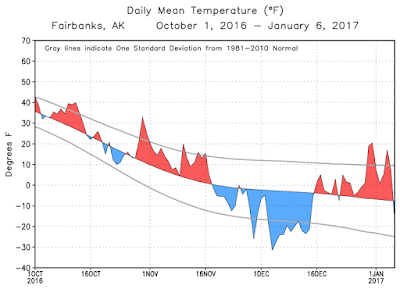 It's interesting to look at how the winter-time temperature variance depends on the phases of ENSO, the PDO, and the NPM.  El Niño winters (like last winter) tend to bring reduced temperature variability to much of Alaska because of the persistent flow patterns associated with low pressure to the southwest of Alaska.  La Niña winters tend to be more variable as high-pressure blocking episodes develop and then dissipate in the vicinity of the Bering Sea.

The chart below shows a box-and-whisker representation of Fairbanks November-March temperature variability for different phases of ENSO.  For reference, last winter's standard deviation of daily temperature anomalies was only 10.8°F, the second lowest on record. 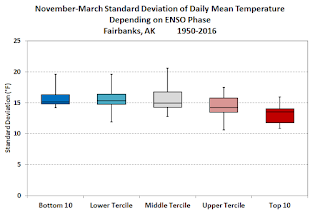 A parallel analysis for the PDO phase shows a similar relationship but with a more notable enhancement of variance on the "cold" side, i.e. negative PDO. 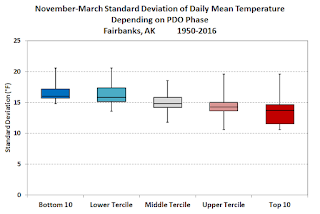 Finally, the NPM chart shows a surprisingly strong relationship, given that the NPM has little relationship with mean winter temperature in Fairbanks; negative NPM winters tend to have lower temperature variance.  Of course the fact that the NPM is uncorrelated with mean temperature does not at all mean that the circulation patterns are similar; the negative NPM flow pattern is more El Niño-like in the vicinity of Alaska, whereas the flow more resembles a La Niña pattern when the NPM is positive. 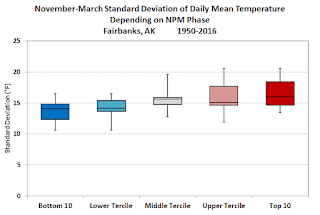 Given that this winter has so far been characterized by a modestly positive PDO and a strongly negative NPM, we would expect the temperature variance to be lower than normal in Fairbanks.  However, as we discussed with respect to the heavy December snowfall, this winter is not quite conforming to expectations.