Clearing skies allowed temperatures to drop to very low levels in most parts of the interior in the past 48 hours, with Fairbanks airport reaching -51°F yesterday morning.  The high temperature for the midnight-to-midnight period was only -41°F.  These are the coldest conditions in Fairbanks since late January 2012.  Many other locations, distributed very widely across the interior, dropped well into the -50s, with the "winner" being the Kanuti Lake SCAN site at -61°F as of 5am today.

The following map, courtesy of NOAA/NWS, shows reported low temperatures below -50°F in the 24 hours ending around 5am today. 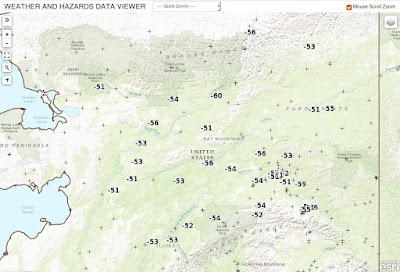 As we noted before, the deep trough over Alaska has imported very cold air aloft, so the low surface temperatures are entirely to be expected under clear skies with very little solar insolation and light winds.  The Fairbanks soundings have measured 850mb temperatures around -20°F in the past couple of days, and it's not unusual to see an inversion of 30°F or more from the surface to 850mb at this time of year.  Under the right circumstances the inversion can reach 40°F or more, but that's more common under high pressure.  The sea-level pressure (MSLP) has actually been considerably below normal in the past several days.

The relationship between MSLP and temperature inversions is illustrated by the pair of charts below, which show the 850mb and surface temperatures on high-MSLP days (top chart) and low-MSLP days (bottom chart) according to the winter-season Fairbanks balloon soundings since 1981.  There is considerably more scatter in the relationship when MSLP is high, because the surface conditions are more decoupled from the free atmosphere, and accordingly strong inversions are more common; notice that there are quite a number of days in the top chart with surface temperature more than 40°F colder than 850mb temperature.  In contrast, this almost never happens when MSLP is low, and it's not coincidental that surface temperatures almost never get below -40°F when MSLP is low.  Interestingly, yesterday had one of the lowest MSLP readings on record for a -40°F surface temperature in the Fairbanks sounding, and this attests to the strength of the upper-level trough. 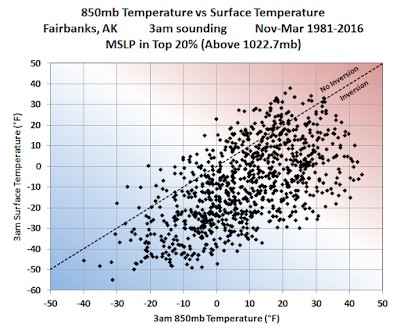 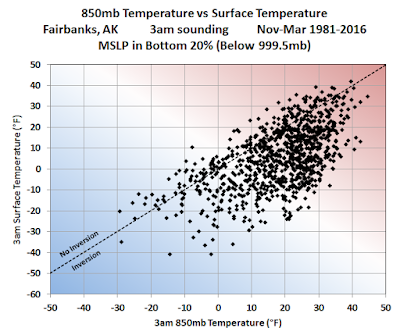 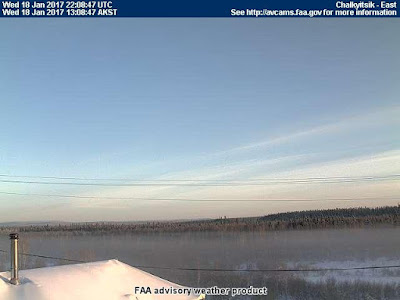 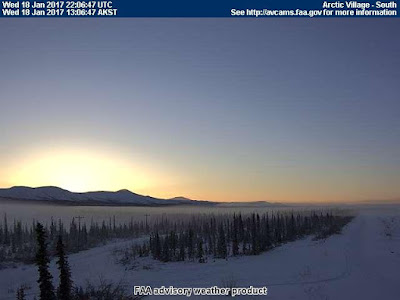 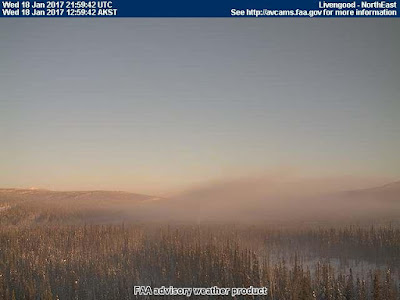 Posted by Richard James at 7:48 AM