Rick T. here with a short post for future reference. Here's an annotated plot of the most extreme cold snaps during the Weather Bureau/NWS era (since late 1929) in Fairbanks, from downtown, Weeks Field, International Airport, wherever the observations were being made. Here we're looking at all the cold snaps with a 7-day average temperature of 40 below or lower. Note: average temperature, not average low temperature. The dramatic dropoff in frequency and intensity of cold snaps post-1975 is partly PDO shift, partly trend and partly urban growth and the attendant ice fog, which serves as something of a "blanket" for the valley floor.

For those in Fairbanks in 1989: yes, the lowest weekly mean temperature reported from the Airport was -43.0F, and I agree, I think there was a problem with the temperature sensor on at least a few days. But based on the Ft. Wainwright observations, such as there were, it was not greatly lower than that. 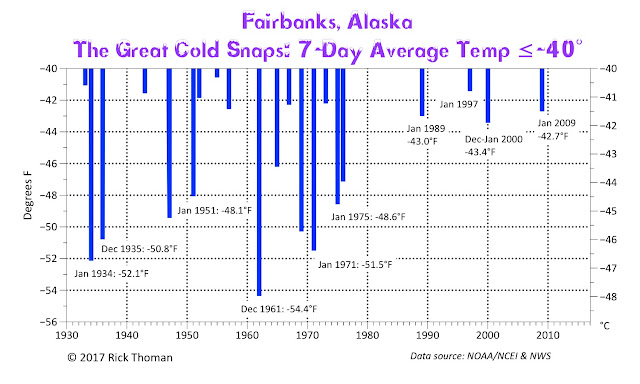