Last summer I remarked on an intense low pressure system over the high Arctic in August and noted that strong Arctic storms seem to have occurred rather frequently in summer in recent years.  Another instance of this phenomenon appears likely to develop early next week, according to the highly-regarded ECMWF forecast model; it will be interesting to see how strong this one gets.

Here's a map of predicted sea-level pressure and 850mb wind speed for 3am AKST on Tuesday; the minimum pressure is about 968mb, which is comparable to the storm last August.  This is also close to the all-time record for lowest pressure in the Arctic domain during the summer months. The map above shows the forecast from a single run of the model, but of course it's nice to look at the ensemble data to get an idea of uncertainty.  Here's a chart of the ensemble mean, minimum, and maximum of the 70-90°N minimum pressure; so we see that on average the 51 ensemble members show a minimum pressure of around 967mb on Sunday evening (Alaska time).  The peak intensity is consistent with the single model run shown above, but the ensemble shows a faster-developing storm. 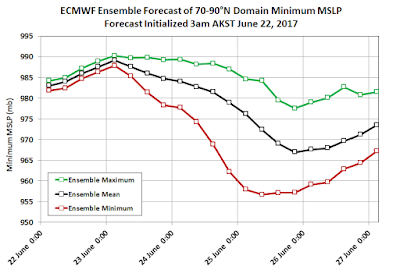 Based on the window of ensemble forecasts, there appears to be a high chance that the storm will deepen below 980mb, and the most extreme member shows a pressure of below 960mb; this outcome is unlikely, but perhaps not impossible.