Eagle was hit with quite a hail storm yesterday afternoon - here's photographic evidence via the NWS Twitter feed.


Here's how the storm was described in a NWS statement:

"The town of Eagle had a thunderstorm from 3 to 4 pm today with hail lasting for over one half hour. By the time the storm was over, an inch or more of hail was covering the ground. Some of the hail was one half inch in diameter. Eagle also had winds gusting to 25 mph, and had over sixty-six hundredths of an inch (0.66) of rain from that storm. A long time weather observer in Eagle reports that they have not had a storm like this since the 1970s."

And here's an animation of webcam images from the airport, showing the dramatic approach of the storm and what appear to be hailstones falling in one of the shots.  Note that the airport only reported 0.25" of precipitation and appears to have had much less hail; but the airport is more than a mile away from the village.

By way of explanation, the main culprit appears to be high humidity.  Surface dewpoints were in the upper 40s yesterday in Eagle as the temperature rose to 78°F, leading to convective instability.  Furthermore, the Fairbanks sounding from yesterday afternoon showed a rather notable moist layer in the mid-troposphere (750-500mb), and this is a favorable environment for storm updrafts to be maintained without dilution by surrounding dry air.

The upper-air map shows a ridge in place over northwest Canada, but high pressure certainly does not always translate into clear and dry weather - notice the correspondence of yesterday's lightning strikes with the upper ridge location.  Note also the lightning on the North Slope; Deadhorse reported a thunderstorm - a rare occurrence up there. 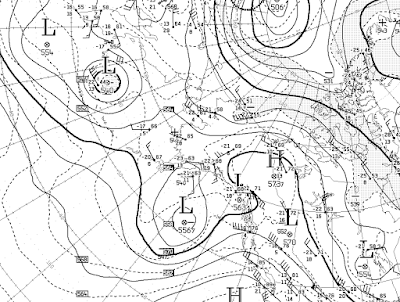 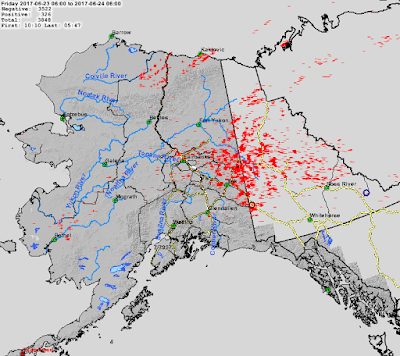 Posted by Richard James at 8:21 AM

Email ThisBlogThis!Share to TwitterShare to FacebookShare to Pinterest
Labels: Hail