Arctic sea ice extent is now close to its seasonal minimum, but in the past few weeks there has been less ice retreat than in some recent years.  Consequently a new record minimum extent is not likely to occur this year, although the National Snow and Ice Data Center notes that the ice edge in the Beaufort Sea is currently farther north than at any other time in the satellite era.  Here's the latest map of ice extent (defined as areas with greater than 15% ice concentration). 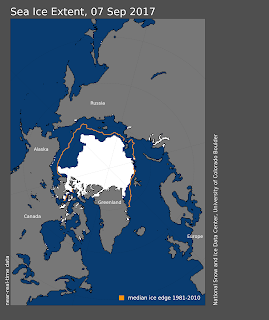 The summer circulation pattern was quite unsettled over the Arctic Ocean, with persistently below-normal sea-level pressure, especially to the north of Siberia.  The Arctic Oscillation was generally positive, corresponding to lower than normal pressure in the high latitudes.  Here are monthly maps of sea-level pressure anomaly from June through August. 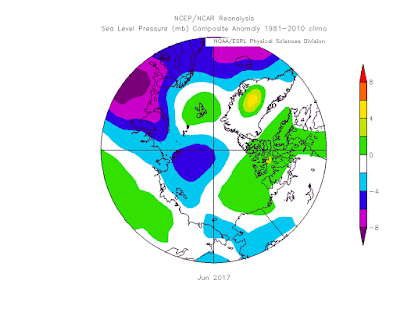 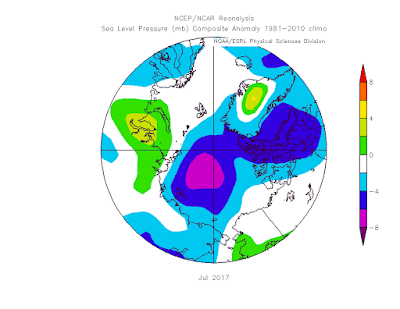 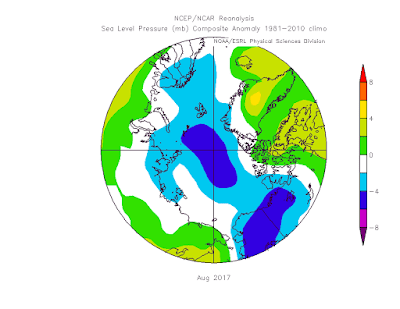 Based on the 19 Arctic coastal observing sites that I've used before on this blog (e.g. here), temperatures were quite close to the 1981-2010 normal this summer on average around the Arctic basin, and this is a marked contrast from the persistent and extreme warmth of 2016.  The first chart below shows this year's June-August mean temperature in the context of recent decades, and the second chart shows the rather sudden cooling (relative to normal) that has occurred since late winter. 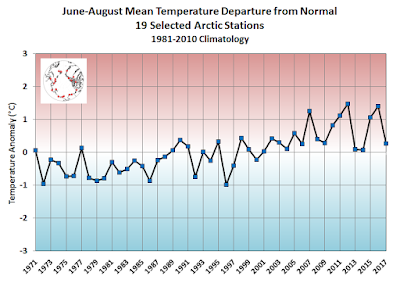 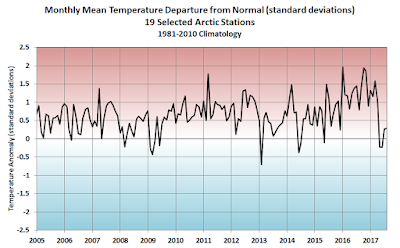 Given that Arctic sea ice extent is still far below normal, it's very likely that unusual warmth will return around the Arctic basin this autumn as the wide expanse of open water provides a direct heating influence; this post from last year shows the extraordinary warming trend for the month of October.  It will be interesting to see how the winter turns out, but in light of recent years it would be surprising to see anything other than significantly above-normal temperatures again for the seasonal mean over the Arctic basin.