The first snow of the season was reported at Fairbanks airport early this morning, but so far it's only a trace amount and mixed with rain.  According to long-term records, more than 80% of years bring at least a trace of snow to Fairbanks in September, and in recent years it's been more like 90%; the only years in the past two decades without any snow in September were 2007 and 2010.  Of course two years ago 11 inches fell on this date:


Up in the hills, rain turned to snow yesterday afternoon as colder air moved in aloft.  Here are a couple of webcam shots from 3pm and 7pm yesterday at 2200' on the Steese Highway. 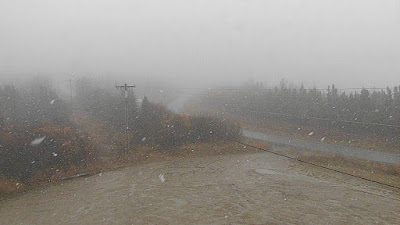 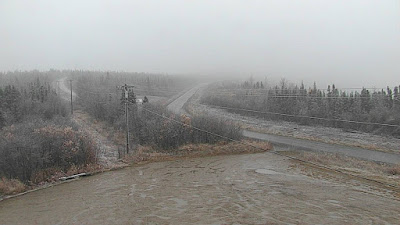 Temperatures in Fairbanks have now entered the 6-week period of most rapid decline, with peak cooling of around 6°F per week occurring near October 20.  It's interesting to note, however, that daily maximum temperatures cool more quickly at first, and daily minimum temperatures then catch up; the difference in cooling rates is most pronounced from mid-September to early October. 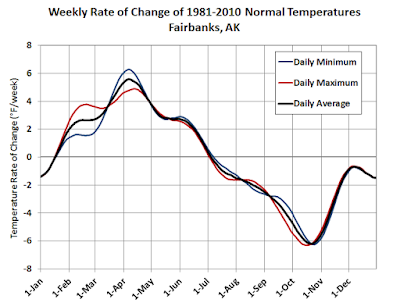 Posted by Richard James at 4:36 AM