While the attention of many meteorologists (this one included) has been drawn to the remarkable storminess in the tropical Atlantic Ocean lately, significant events have been unfolding at the same time in the tropical Pacific.  Here's a sequence of maps showing the departure from normal of the sea surface temperature (SST) at 4-week intervals; notice the expanding area of below-normal SSTs along the equator in the central and eastern Pacific. 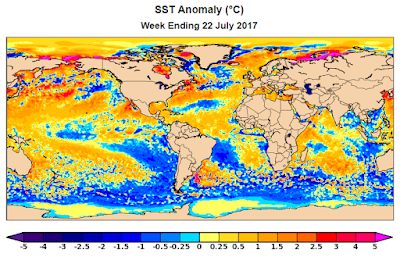 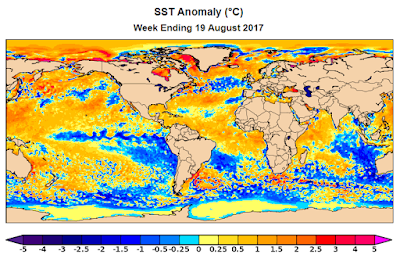 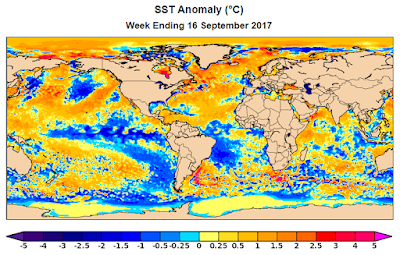 In tandem with the clear trend towards more La Niña-like conditions, the leading seasonal computer models have shifted quite dramatically towards a La Niña outlook for winter, and in response the most recent IRI/CPC forecast showed a sudden change to a much higher probability of La Niña.  Compare the two forecasts below, issued only a few weeks apart.  This is as dramatic a shift as I can recall in what is usually a slowly-evolving assessment of long-range forecast possibilities.

So what does the prospect of La Niña mean for Alaska?  One could be forgiven for having a hazy recollection of the last La Niña episode - the last time a modest La Niña occurred in winter was 2011-2012, and the last strong episode occurred the year before that.

The key feature of a La Niña winter, from the Alaskan viewpoint, is that the normal trough of low pressure over the Bering Sea and Aleutians tends to be relatively weak, and episodes of high pressure in this area are more common than normal.  A ridge over the Bering Sea is a cold set-up for most of the state, so it follows that most of Alaska is usually colder than normal during La Niña, although the signal is strongest in the southern part of the state.

The propensity for high pressure to Alaska's west and southwest reduces the frequency of storm systems moving into southern Alaska, so the amount of snow and rain is typically lower than normal in the south.  However, the west and north of mainland Alaska tend to see above-normal snowfall.

Here are maps of the November-March pressure, temperature, and precipitation patterns that were associated with the 10 strongest La Niña episodes since 1950, based on the Multivariate ENSO Index of Klaus Wolter. 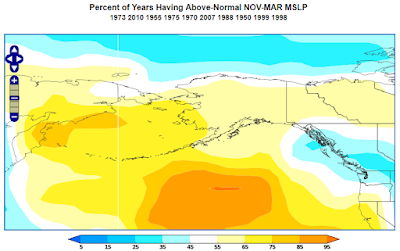 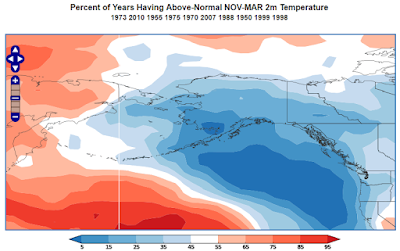 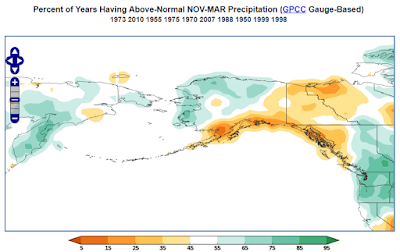 Another aspect of the La Niña influence is that the flow pattern and associated temperatures tend to be more variable than normal over Alaska, so while the mean is below normal, fluctuations from week to week tend to be large.  This means that very cold conditions (much below normal) are considerably more likely than normal, but the chance of occasional very warm conditions is not much reduced except in southern and southeast Alaska.  For more reading on this, search "ENSO variance" on this blog.

Finally, the charts below provide another viewpoint on Fairbanks winter temperatures as they relate to the ENSO phenomenon. For this analysis I've calculated the November-March temperature anomaly relative to two different climatology periods in an attempt to remove the 4.5°F systematic difference between the early (1950-1975) and later (1976-2016) periods.  The vertical colored lines show the ENSO tercile boundaries. 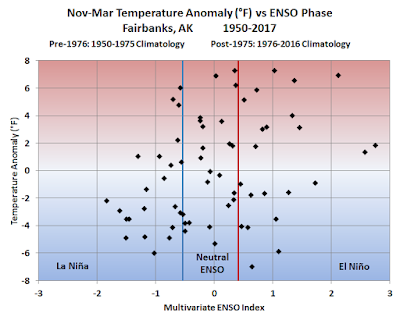 The cold signal associated with La Niña is evident in the lower left, but it's clear that marginal La Niña winters are not always colder than normal, and the overall correlation between the ENSO index and Nov-Mar temperatures is not particularly good.  This partly reflects the fact that the PDO phase is not always aligned with the ENSO phase, and of course the PDO is more closely connected to Alaska winter temperatures than ENSO - see the corresponding chart below for the PDO correlation. 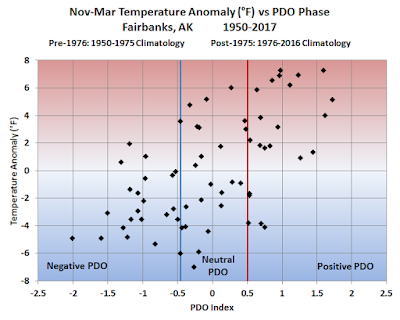 If we re-do the ENSO chart after excluding winters with an out-of-phase PDO, then the correlation improves quite a bit as we would expect, and especially for El Niño winters. 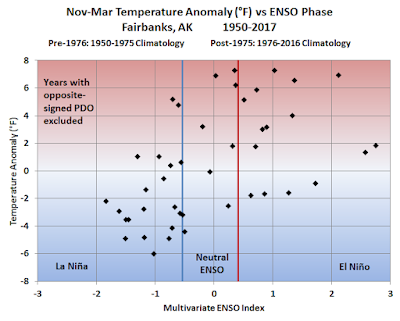 So in conclusion, if La Niña continues to develop into a strong episode this winter, then the usual La Niña patterns will become quite likely in Alaska; but if we see a less robust La Niña, then the outcome is much less certain.  Another way of saying this is that the PDO is more important; but unfortunately it is much more difficult to predict the PDO phase.  The PDO has been bouncing around near neutral recently and shows no indication of becoming significantly negative - and indeed I would say a significantly negative phase is probably unlikely because of the lingering subsurface effects of the strongly positive PDO phase that we've experienced in recent years.