Freezing rain created a fair bit of disruption in the Fairbanks area this week, with an initial round of light rain for a couple of hours on Monday morning followed by much more persistent and significant rainfall on Tuesday evening and overnight into Wednesday.  A very substantial snowfall also occurred, and the liquid-equivalent precipitation total was well over half an inch; this was the wettest January storm in 18 years.  There was also enough wind to produce Fairbanks' first ASOS report of "blowing snow" this winter - not a common occurrence in the sheltered Fairbanks bowl.

Here's the surface analysis from early Wednesday morning, courtesy of Environment Canada; a trough axis and low pressure center are indicated very close to Fairbanks.  The Fairbanks sounding from the same time is also shown below - note the strong southwest flow throughout the troposphere and the high precipitable water (total moisture content) of 1.22 cm. 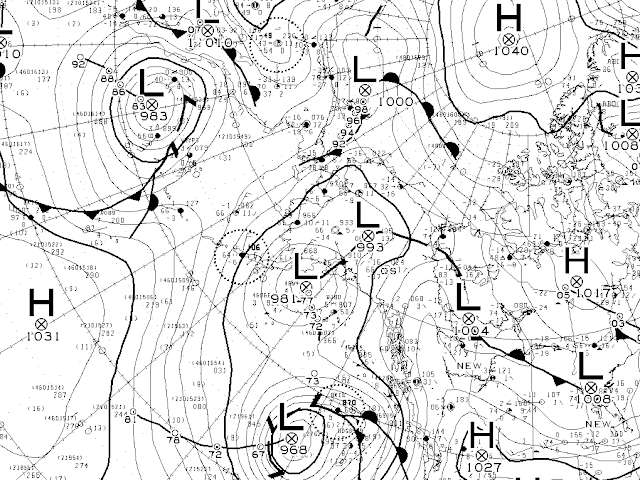 In view of this rather significant freezing rain event, it's interesting to look back at the long-term history of similar conditions in Fairbanks winters.  The chart below shows the percentage of hourly observations in Fairbanks with either drizzle or rain reported at the top of the hour, for winters back to 1950-51  (thanks to Rick Thoman for the idea for this chart). 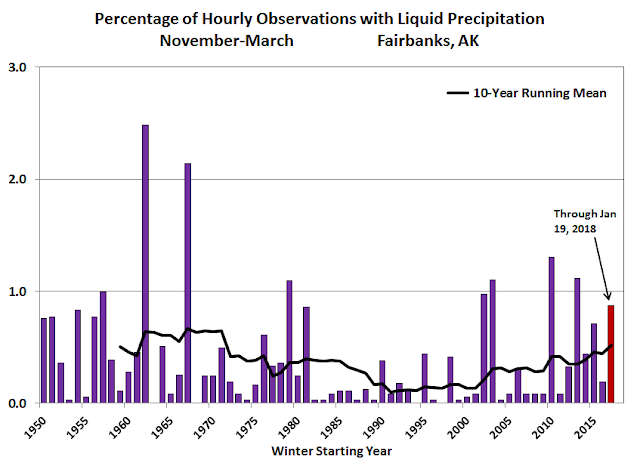 There has certainly been an uptick of winter rain and drizzle events in recent years, but the 1960s saw a couple of remarkable winters with a lot of freezing precipitation.  In particular, January 1963 stands out as highly anomalous; here's how it unfolded:

Road conditions must have been somewhere between treacherous and impossible by the end of that month.  A quick look at the 500mb height map for January 1963 (below) shows an interesting dipole pattern, with much above-normal heights near and south of Alaska and also near Iceland.  The Arctic Oscillation was strongly negative, indicating a weak circumpolar flow that allowed cold air to spill south and, conversely, warm air to surge north.  Consequently it was a very cold month in the lower 48, and Europe was extremely cold; England had its coldest calendar month of the entire 20th century.  In some ways the topsy turvy pattern resembles recent conditions: both winters (1963 and 2018) produced headline-making cold at lower latitudes but exceptional warmth in Alaska and the Arctic. 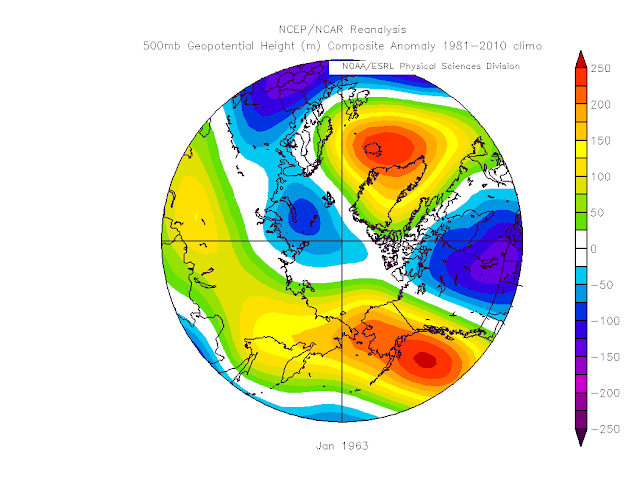