Last week Rick Thoman, the founder of this blog and still occasional contributor, announced the publication of a paper of which he is lead author, entitled, "The Record Low Bering Sea Ice Extent in 2018: Context, Impacts, and an Assessment of the Role of Anthropogenic Climate Change".


Our paper on record low Bering Sea ice in late winter/spring 2018 is out in the @ametsoc Explaining Extreme Events. Major result: the low ice extent in the Bering seen the past two years may be typical in 25 years. #akwx #seaice @Climatologist49 @NSIDC https://t.co/UWepyVFTVG pic.twitter.com/Ib5W0yc36d
— Rick Thoman (@AlaskaWx) December 9, 2019

The brief paper is well worth a read for those interested in Alaska climate; Rick and co-authors document various aspects of the unusual winter of 2017-2018 in the Bering Sea, with a focus on the extreme lack of sea ice.  As we discussed on this blog at the time (for example, here), late winter Bering Sea ice extent was far below previous records in the modern satellite era, with both pre-existing ocean warmth and extremely persistent southerly flow contributing to the anomaly.

The most striking conclusion of the paper arises from an analysis of climate model output, which indicates that the very low ice level of two winters ago "will likely by typical by the 2040s", i.e. barely more than 20 years from now.  This result is obtained by applying a bias correction to the climate model's ice predictions over the satellite era, and then finding the frequency with which the 2018 ice shortfall is surpassed in the model forecasts for future decades.  It should be noted that the model simulations use the RCP8.5 climate forcing, which is a high-emissions scenario that some suggest is unlikely to occur, although of course this is just one aspect of the uncertainty (see the following article for discussion of RCP8.5: https://www.carbonbrief.org/explainer-the-high-emissions-rcp8-5-global-warming-scenario).

One point that is dealt with briefly in the paper, but may be worthy of further consideration, is the apparent discrepancy in Bering Sea ice trends between the climate model and the real world.  Despite the drastic drop-off in ice extent in 2018 and 2019, the 41-year downward trend is not yet statistically significant, and in fact prior to 2018 the trend was upward; it was even statistically significant in the upward direction for a while (e.g. 1979-2013).  See the figure below for the observed January-April ice extent.  According to the paper, most of the model's simulations (35 members of a 40-member ensemble) have 1980-2018 declining trends that are greater than what has really happened. 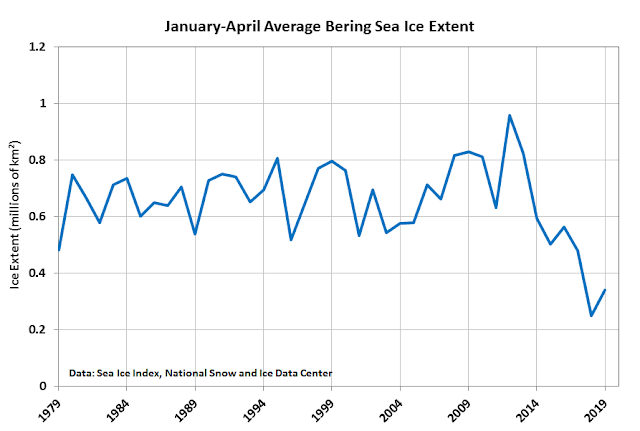 Does this mean that the model is not realistic?  Not at all.  As Thoman and co-authors explain, the variability of Bering Sea ice on time scales of a few years ("subdecadal-scale") is essentially random, and this means that the observed 41-year trend is only one of a wide range of trends that could have occurred.  In other words, the real world is only one of an infinite number of possible realizations based on the same physics, and the climate model suggests that the actual Bering Sea trend - with its lack of decline until recently - happens to have been an unlikely one.  Obviously it's very important to verify that the model is in fact simulating sea ice properly, and the paper cites other studies showing that this is the case.  And of course it goes without saying that sea ice loss in the Arctic as a whole has been extremely statistically significant, unlike the relatively small Bering Sea basin. 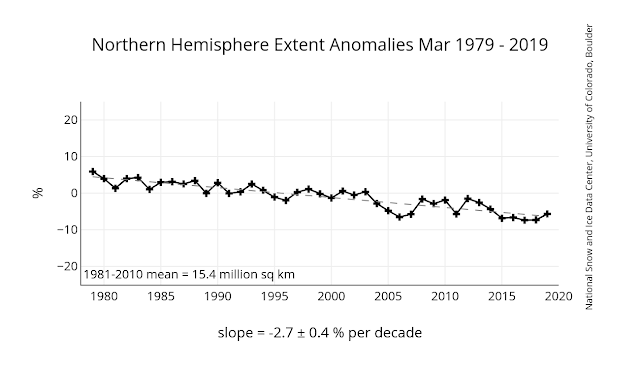 All in all - congratulations to Rick on the publication - this is good work.