A fresh wave of Arctic cold has sunk south across Alaska in the past couple of days, and surface temperatures have plummeted in areas where skies have cleared.  Sub-minus 50°F was observed today in a wide range of locations from the Kuskokwim valley upstream of McGrath, northward to the Koyukuk River drainage, and east to the usual cold spots in the northeastern interior.  Fairbanks held off the cold for a while but has dropped to -40° this evening.  Click to enlarge the map below.

The coldest report was from a cooperative observer near Eureka, just northeast of Manley Hot Springs, where the thermometer apparently registered -65°F.  This is the lowest observed temperature in Alaska in nearly 8 years.

Another notable data point came in from the high-quality CRN site in the Nowitna NWR (Ruby 44 ESE); the temperature dropped to -57°F, which is the lowest temperature observed so far by any CRN site in the nation (in any year).  Most of the CRN sites in Alaska were installed in the last 10 years; the Nowitna site didn't start reporting reliably in winter until two years ago, but nevertheless it already held the CRN record with -54°F in January 2018.

Finally, it's worth noting that Bettles has not risen above -55°F since midnight, and if this holds through midnight tonight it will be the coldest December day in Bettles' history (data since 1951).  The last time the daily high temperature was -55°F or below was in January 1993, and it's never happened outside of January (again, since 1951).

Satellite data indicate that the heart of the cold was over the Kanuti Flats south of Bettles; this is certainly one of the coldest parts of the interior (try searching for "Kanuti" on this blog).  Below are a couple of images showing the lowest temperature estimated by the radiometer on the Suomi polar orbiting satellite today; I've marked several of the sites of interest, and the second image is a zoomed-in view with a different color scale.  Note that white indicates missing data. 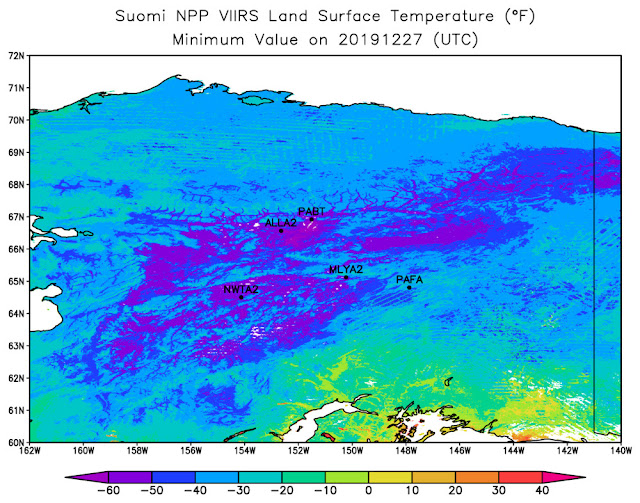 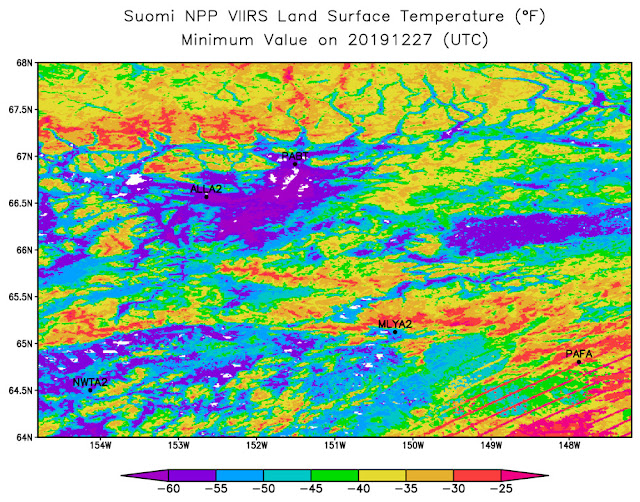 The lowest estimated temperature in the satellite grid is -64°F on the Kanuti Flats, which seems very plausible in light of the nearby observations.  Allakaket, which is usually colder than Bettles, reported as low as -60°F and hovered around -58°F all day.

On the other hand, the satellite data don't seem particularly supportive of the -65°F near Eureka (MLYA2), although there's no reason to think it's physically implausible.

Here's a simple animation of the webcam view from the Allakaket airport today. It's interesting to see the slight and variable air movements in the half-light of a near-solstice day right on the Arctic Circle.

And for the record, here's yesterday morning's 500mb analysis showing the main culprit for the cold: the intense Arctic vortex north of the Alaska-Canada border.  Based on sounding data from Utqiagvik (850mb temperatures below -32°C), the air mass is the coldest prior to the New Year since 1983.  From a scientific perspective, it's nice to see something different after the pervasive warmth of recent months and years. 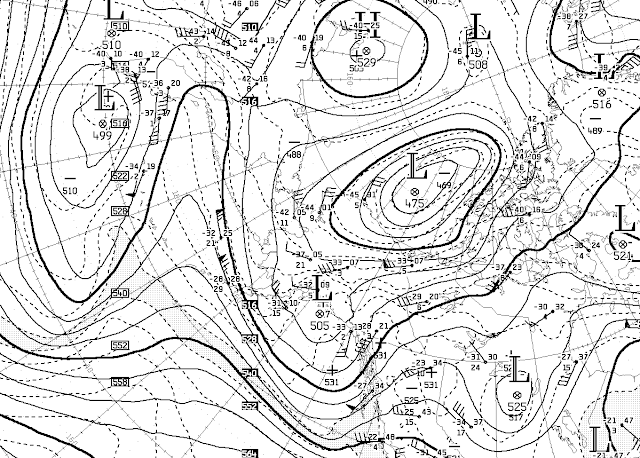