Even casual observers of weather and climate are probably aware that a La Niña episode is currently under way in the tropical Pacific Ocean, and this will affect the weather patterns that unfold in the higher latitudes as we go into Northern Hemisphere winter.  In particular, Alaska tends to see quite reliable winter impacts from La Niña: namely, colder than normal, particularly in the south, and often drier than normal in the south and southeast.

Here are a couple of overview maps based on strong La Niña conditions since 1950, showing the percent of winters with above-normal temperature and precipitation respectively.  The temperature data is obtained from the NCEP/NCAR global reanalysis, and we're not taking into account long-term trends: the "normal" baseline here is 1951-2010. 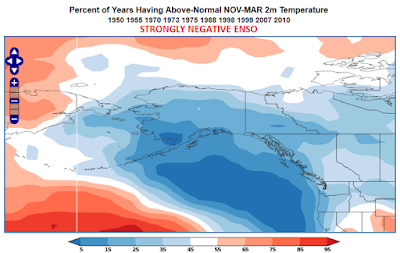 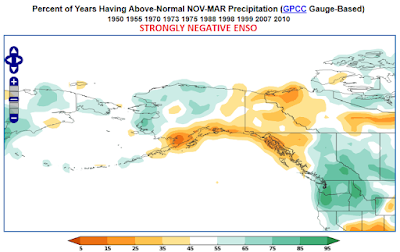 The cold in southern Alaska is very clearly connected to cold across the northeastern Pacific, which reflects a negative phase of the PDO (Pacific Decadal Oscillation); all of the top La Niña winters also have a negative PDO.  Currently the PDO is negative, but that's not because the northeastern Pacific is cool; it's just less extremely warm than the waters to the north of Hawaii, and that makes for a negative PDO index.  So given that current SSTs are well above normal, not below normal, in the Gulf of Alaska, we would expect this to take the edge off the La Niña cold in southern Alaska - at least until the SST pattern shifts towards a more canonical negative PDO state. 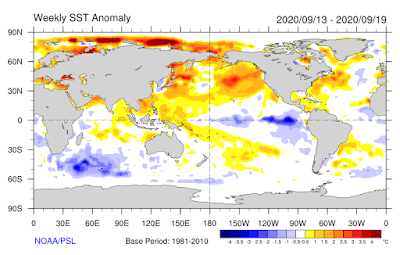 A more focused view of what we might expect this winter is shown in the figures below.  Here I've selected past years with La Niña conditions in autumn and then looked ahead to winter; this avoids making the assumption that La Niña will be strong throughout winter.  I've also restricted myself to La Niña years since 1979, I'm using the ERA5 reanalysis, and I'm showing the average departure from normal rather than the percent of years above normal. 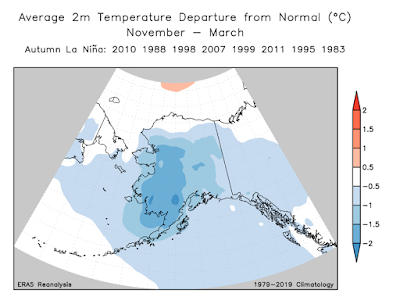 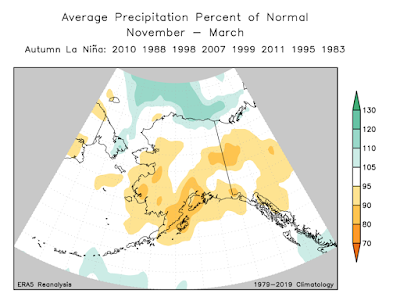 The temperature signal is quite substantial in this average of 8 similar years, with a negative departure from normal of 1.5-2°C from the western interior to the northern Alaska Peninsula.  Compare this to the climatological (interannual) standard deviation of a little over 2°C for the 5-month period of November through March.  The average precipitation anomalies are relatively less dramatic, with south-central Alaska seeing a seasonal deficit of a little over 10% on average.  The top precipitation map above shows that the dry signal is quite reliable near the south coast, but there is a discrepancy between the two precipitation maps over western Alaska.

What's the cause of these patterns?  The maps below show that years with La Niña during autumn tend to see an upper-level trough extending from the Arctic Ocean north of Alaska to southeastern Alaska in the subsequent winter, and sea-level pressure is usually higher than normal over the Bering Sea.  This configuration draws cold air down from the north more often than normal, and the relative absence of storminess in the Bering Sea and Aleutians translates into reduced precipitation over southern Alaska.  Another way to think of it is that the jet stream spends more time to the south of Alaska rather than bringing Pacific storm systems up into western and southern parts of the mainland. 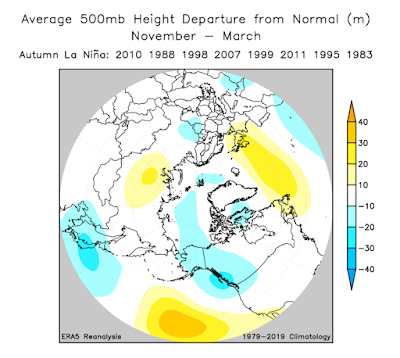 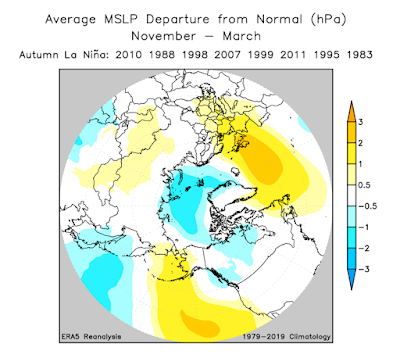 How about wind speed?  The first map below shows the average departure from normal in similar past years, and it points to reduced wind on the North Slope and enhanced wind in the southern Alaska Peninsula and eastern Aleutians.  To highlight the signal over the interior, where average winds are mostly light, I added a second map to show the percent departure from normal.  The magnitude of the signal is very small, but a reduction in wind in the western interior is consistent with reduced storminess and - perhaps more significantly - higher pressure that tends to produce stronger inversions with calm, clear, and cold conditions. 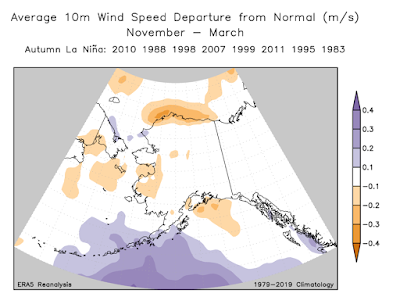 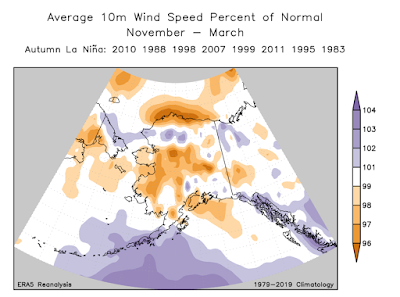 Finally, snow depth - see below.  This is interesting: even though liquid-equivalent precipitation tends to be lower than normal around Bristol Bay, snow depth tends to be higher because of the cold (i.e. there's much less rain).  The same is true in parts of southeast Alaska.  But in much of the west, interior, and south-central Alaska, the ERA5 data suggests that below-normal snow depth is more common. Much could be said about the extent to which historical station data support these results from the ERA5 product, but I'll leave that for another time.  To conclude, here's a hemispheric view of these climate variables, plus a bonus map for solar radiation at the end.  It's particularly striking to see that western Alaska has the most notable cold signal in the hemisphere, while the La Niña "hot spot" is in central Arctic Russia (where - interestingly - it has been excessively warm throughout this year so far). 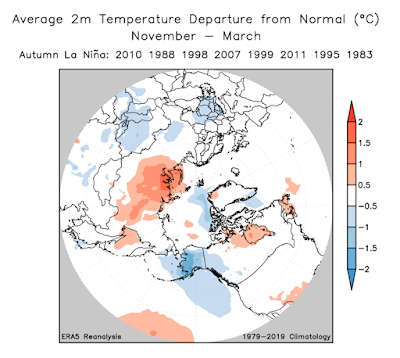 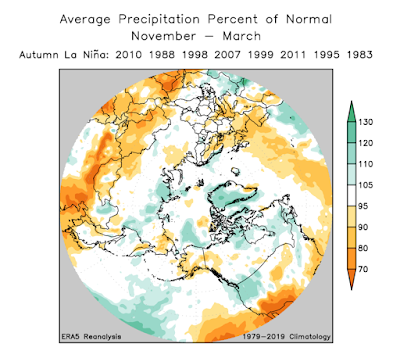 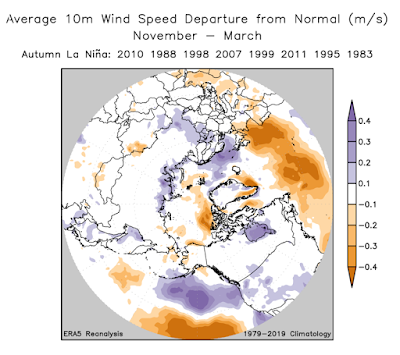 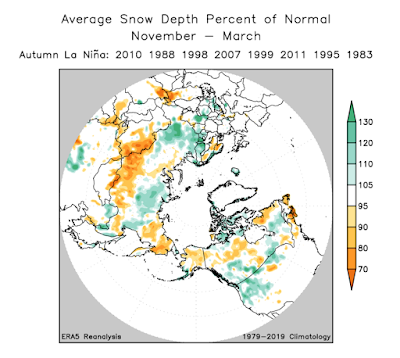 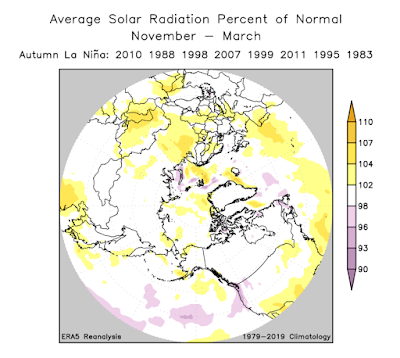 Posted by Richard James at 4:46 AM