Back in 2018 and 2019 I looked at permafrost conditions at a couple of central Alaska monitoring sites maintained by UAF's Permafrost Laboratory, and it's high time for an update now that two more years of data are available (thanks to Colby Wright at the Lab).  Here are the previous posts: here and here.

First, here's an updated time series at 52cm depth at the Smith Lake 1 site near UAF; click to enlarge. 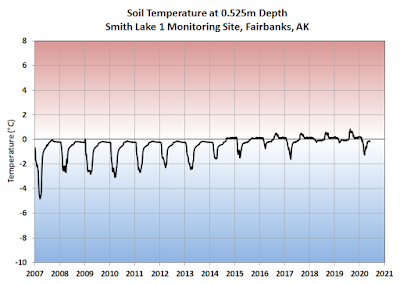 We noted in 2019 that this data reveals a remarkable transition: at this depth below ground, the site went from permanently frozen to barely frozen even during winter; the minimum temperatures in 2018 and 2019 were -0.24°C and -0.27°C respectively.  However, colder conditions last winter (2019-20) did briefly take the temperature back below -1°C.  The data ends in May 2020, so we don't know how things are looking this winter.

To illustrate the sustained warmth that produced the change, here's a chart showing monthly air temperature anomalies since 2012 in Fairbanks. 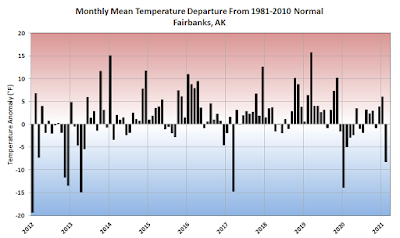 Immediately following the coldest April on record in 2013, there was a dramatic warm-up in May (read about it on the blog archives, e.g. here), and temperatures stayed more-or-less above normal for the next six and a half years (with the exception of March 2017, which also shows up in the ground temperature trace).  But 2020 then started out with a very cold January and was a cooler year overall.

An updated chart of annual minimum temperatures in the soil column highlights just how close the Smith Lake 1 site has come to having a permanently thawed layer (I believe this is called a talik) below the seasonally frozen layer.  However, the 2020 data will show a slight recovery, as noted above. 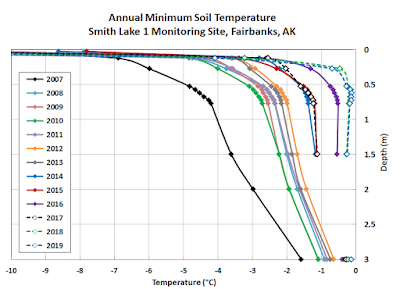 Annual mean temperatures rose above freezing for the first time in 2018 and 2019 at depths from about 30-75cm, and remarkably the average temperature rose almost to 0°C down at 3m depth. 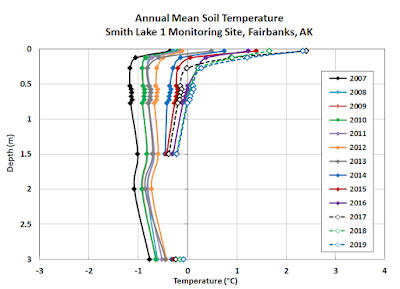 As for annual maximum temperatures, these show that the active layer depth increased to over 1m, but with thaw very close to occurring at 3m depth, it seems this permafrost is nearly gone. 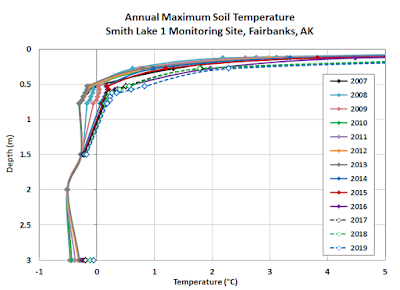 Similar trends are seen at the Bonanza Creek 1 site, about half way between Fairbanks and Nenana.  In this case it's interesting and a bit odd to see the two-year cycle of increasing temperatures: there were significant jumps in 2014-15, 2016-17, and again in 2018-19.  Like the Smith Lake site, the ground barely froze below 0.5m in 2018 and 2019; but unlike Smith Lake there's no data below 1.5m to see what's happening lower down. 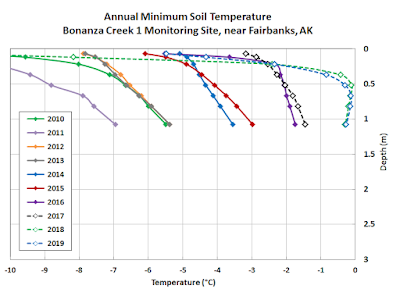 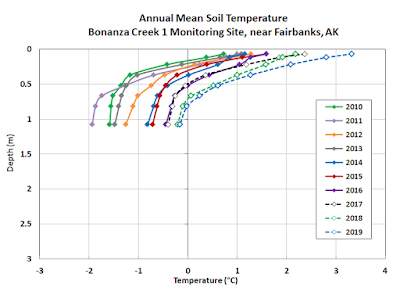 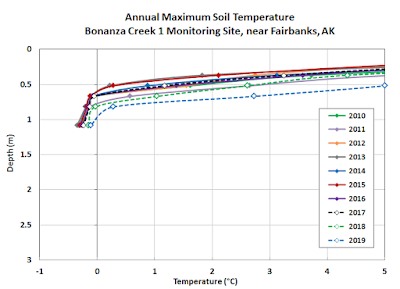 A time series chart for 67cm depth shows the stair-step warming, and at this site there was no recovery in early 2020; the last 3 winters in the series all failed to drop below -0.15°C at this depth, after being frozen nearly all the time in earlier years. 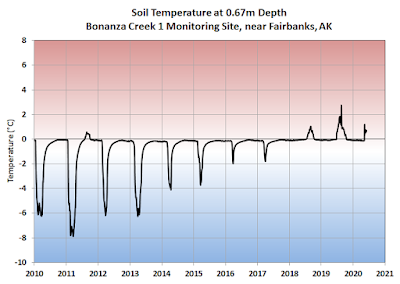 For further reading on recent permafrost trends in Alaska, check out this paper, published in January; I'll comment on it in a future post.

Posted by Richard James at 4:20 AM