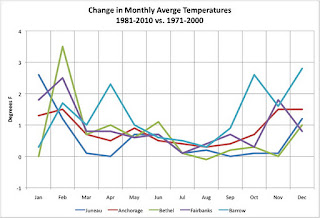 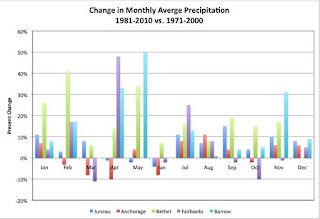 Here's a couple of plots showing how the 1981-2010 normals that became effective August 1st have changed from the 1971-2000 normals at a number of first order stations around Alaska. Of particular note is that all the locations at least a little be wetter, and all locations are warmer. While the absolute temperature changes are largest in winter, the standardized change (the change divided by the standard deviation, not shown) is actually largest in June at nearly all the sites. This has important ramifications for both hydrology and fire weather. The big changes in precipitation at a few sites (but mostly Barrow) reflect a few really wet months in what are otherwise dry times of year, and highlight a problem with using the mean value of precipitation (and snowfall too) as "normal". In these cases the median is a much better statistic for expressing "normal".
Posted by Rick at 12:56 PM