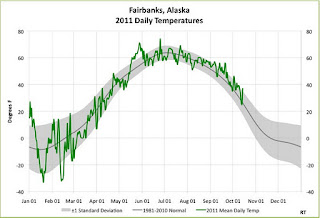 Here's a plot of temperatures thus far in 2011 at Fairbanks. I've plotted the mean daily temperature against the 1980-2010 normals and standard deviation. So, where the green line (2011 data) falls outside of the shaded area, this represents a statistically significant deviation from the expected. This way of looking at variations from normal is much more useful than the raw "departure from normal" in places with continental type climates, or high latitudes in general, where the potential variation in temperatures is much greater during the cold season than the warm season.

The very warm weather at the end of May is the most prominent feature, and to a lesser extent the cold weather in mid to late February. This autumn, the mild weather has been consistent, but not much outside of "expected" range.
Posted by Rick at 12:03 PM