I'm a big believer in the maxim "statistics don't lie, only people do". Okay, I've never actually heard anyone but me say that, but still…

So, here are the statistics on when in the autumn Fairbanks has its first day with the daily mean temperature below freezing. It turns out that the average date in the WB/NWS era (1930-2010) is October 3rd. The time series shows a weak but statistically insignificant trend toward later dates: 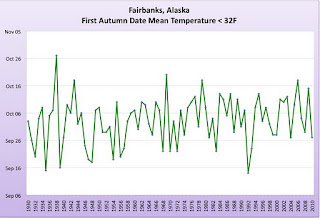 When we put the dates into a histogram, we see that presently (Oct 04) we're right in the peak of the distribution: 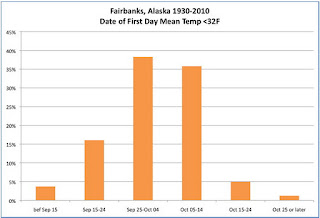 If Fairbanks were to go through the weekend without a day with a mean temperature below freezing, that would be beyond the 75th percentile and into the realm of "unusually late".
Posted by Rick at 6:25 PM