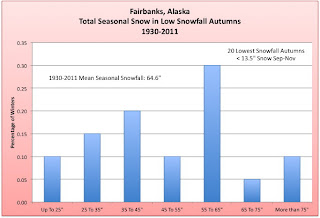 What does this mean for the rest of the winter? To the left is a histogram of total seasonal snowfall for the 20 least snowiest autumns (Sep-Nov) since 1930. As you can see, winding up with more than the long term normal average has occurred just three of twenty times, which turns out to be the same frequency of winters with less than 30" for the whole season. However, 45% of winters have wound up with 55" or more inches of snow, so even with a slow start like we've had this autumn, there is a decent chance, based on the historical record, that Fairbanks will wind up with "near to above normal" snowfall.