We knew this was coming, but it’s now in the books: Barrow recorded the warmest October in more than nine decades of unbroken climate observations. The first plot shows the daily high and low temperatures this past month (the 1981-2010 normals are shaded for comparison). The high temperature was above normal every single day: the low temperature dipped below normal on just two days. 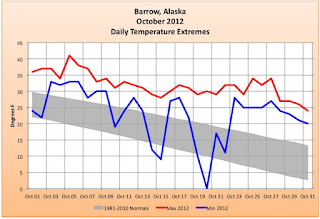 How does this compare to the historical data? Although this past October set a new record, it is obviously in keeping with a now decade long pattern of very warm Octobers, as illustrated in the plot below. The black line is simply the average temperature for the five Octobers up to and including any given year. It's noisy, but obviously the later 1930s and 1940s were mild and the 1970s and 80s were cool. After the mid-1990s there was a steep rise that has flattened out now at a level far higher than any five year period in the 1930s or 40s. The orange line really tells the tale:  this is the five year running standard deviation of mean October temperatures. Even during the warm 1930s and 40s there was roughly the same year-to-year variability as in the cold 1980s and 90s. However, that variability has collapsed in the past decade: October temperatures are not varying by very much at all these days. 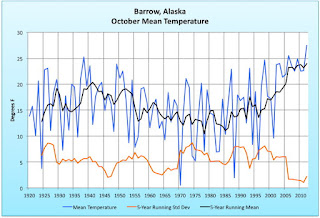 It’s not just that some Octobers have been warm recently, it’s every October for the past decade has far above normal, and six of the ten warmest Octobers have occurred since 2002. The next plot shows the deviation in the mean temperature each October from the 1920-2001 mean. There is nothing special about the 1920-2001 period except that it ends right before the current streak of warm Octobers starts. Choosing a different long term average simply moves the zero line up or down. The patterns remains the same: the past decade of warm Octobers at Barrow is unprecedented: there is nothing like this streak in the past nine decades. 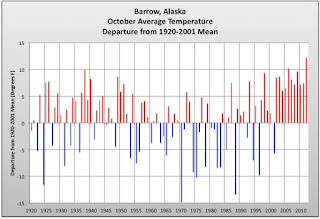 There’s no mystery why Barrow has become so warm in October: lack of near-shore sea ice. Prior to the late 1990s, the Arctic sea ice was typically either at Barrow or not far to the north and northwest by mid-October; in some years the ice was largely in place early in the month (an in rare occasions ice was in place in September). This allowed cold air to move from the high Arctic onto Alaska’s North Slope with little warming. Air over sea ice, which quickly becomes snow covered, can become (or remain) much colder than over the open ocean. The freezing point of sea water is 29F (lower than fresh water due to dissolved salts in sea water), so the temperature of air that had cooled to much lower temperatures over ice but then moves over water will fairly quickly approach that of the water. This is an important point: it’s not just whether the sea ice is at Barrow or not. The distance to the ice edge matters a lot. A fetch of 400 miles over open water (which is about what it was at the beginning of the October) will have a much bigger impact on air temperature than an ice edge 40 miles away, which will have a bigger impact than the ice edge four miles away. This of course is the same everywhere over open oceans: air temperature is close to the ocean surface temperature.

Below is the sea ice analysis for Halloween from the NWS Anchorage Sea Ice Desk. There is still 50 to 250 miles of open water between Barrow and the sea ice, depending on direction. 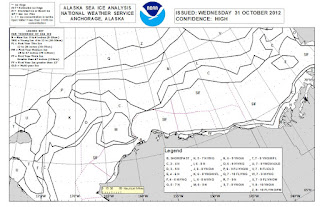 Once the ice closes in, the strong forcing to much warmer than normal temperatures caused by open ocean will be gone, and overwinter and spring temperatures are Barrow will depend more on prevailing atmospheric patterns.
Posted by Rick at 1:10 PM