Wednesday's early accumulating snow in Fairbanks raises the question of whether similar occurrences in the past offer any hints as to the climate patterns in the upcoming winter.  I'm always on the lookout for analogs like this, because years ago I found that unusual early-season snowfall in certain parts of the lower 48 can be a useful predictor for winter conditions.  It's conceivable that the same might be true in interior Alaska.

Below are histograms of the November-December snowfall and temperature, with the columns split between the early-snow and no-early-snow years.  Although a subset of 10 years is rather small to draw a robust conclusion, the distribution does seem to be shifted towards relatively warm and snowy conditions in the years when early snow occurred.

In conclusion, the early Fairbanks snowfall seems to give us a very tentative hint that November through January might be warmer and snowier than average in Fairbanks this winter.  It's not clear why this might be the case, although the early snowfall might be signaling something about the oceanic or atmospheric pattern that is likely to persist or influence the winter conditions.  There is a lot more that could be said about the outlook for the winter, based on other factors, and I hope to put up some more posts in the weeks ahead. 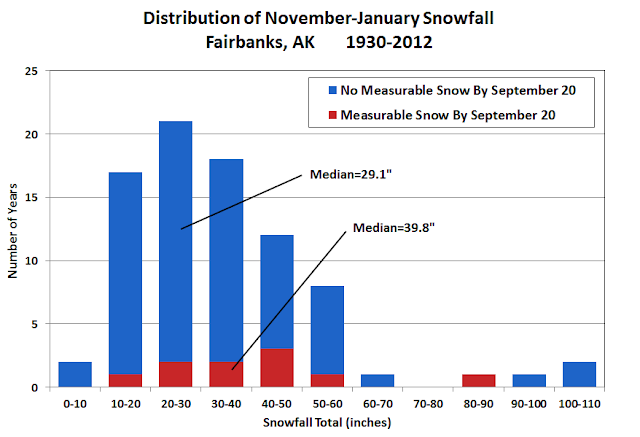 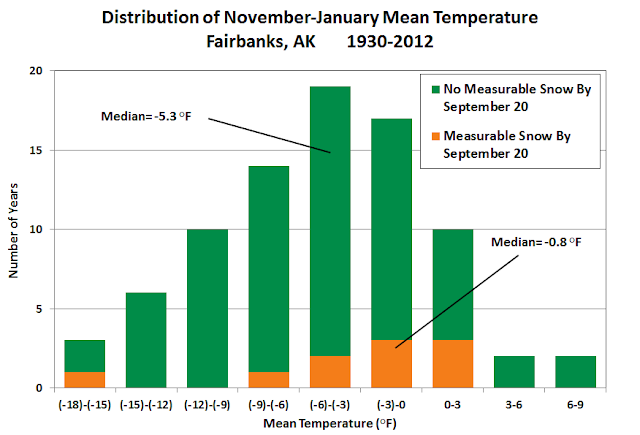 Posted by Richard James at 6:39 AM