The weekend snow accumulation of 8.4" in Fairbanks has brought the season-to-date snow total to 32.9", which is slightly above the long-term mean and median for this date, but still slightly below the official 1981-2010 normal.  The two-day total is the greatest in more than a year, and is equal to the largest amount typically observed in an entire winter.  This is illustrated by the chart below, which shows the distribution of annual maximum 2-day snowfall totals since 1930 in Fairbanks.

If we look at this data in isolation, we might conclude that there is a 50% chance that this weekend's snowfall will turn out to be the largest (2-day) snowfall of the winter.  However, less than a full winter remains in which to get an even bigger snowfall; so given that the date is already December 23, we find that there is only a 31% chance of a bigger snowfall yet to come.  In other words, the chance is 69% that this weekend's snowfall will prove to be the largest 2-day total of the 2013-2014 winter. 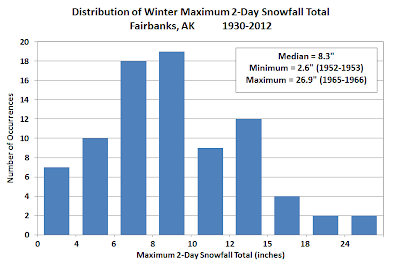