Brian's post the other day raised some intriguing questions about the relationship between snow depth and snow totals in Fairbanks.  The paradox that he observed is that snow totals in recent years have often been below normal while snow depth has been near or above normal.  Has the snow become less dense or undergone less compaction?  The chart below shows a different depiction of the same trend, using the ratio of the February 28 snow depth to the snow total through that date.  I chose February 28 because it's approximately the time when snow depth peaks; the strengthening sun causes more sublimation and eventually melting in March and later.  We see that indeed the late winter snow depth has become larger in recent years compared to the accumulated snowfall total (as measured daily at the airport). 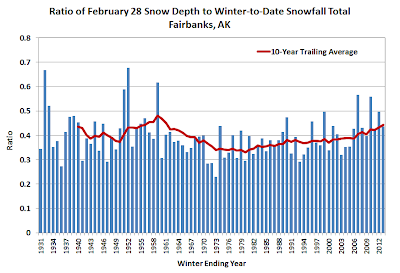 If we look at the total annual snowfall in the cold season (see chart below), we see that recent years have seen snowfall on the low side compared to the 1981-2010 climate normal period; 12 of the last 18 years have been below the 1981-2010 median of 52.5".  This by itself could be part of the explanation for the apparently lower snow density, because the fractional compaction of snow will decrease with smaller snow amounts.  Consider the bottom 12 inches of the snowpack: it will be compacted more if a greater mass of snow accumulates above; and so lower seasonal snowfall will produce lower snowpack density, on average. 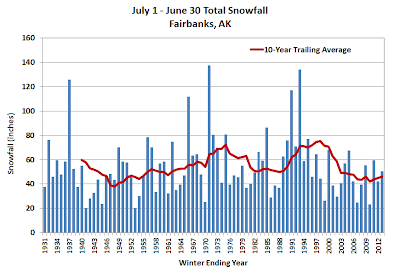 Another interesting trend in the snowfall history is that snowfall has been occurring later in the season in recent years than in the 1981-2010 period overall.  The chart below shows the date at which half of the season's snowfall total was reached; in the 1970's and 1980's, nearly every year saw half of the snowfall occurring before the turn of the year, but in recent years the midpoint date has become later by two or three weeks on average.  I would suggest that this could also affect the late winter snow density, because if snowfall is occurring later, then it has less time to settle and undergo compaction; so again this might contribute to a "fluffier" snowpack. 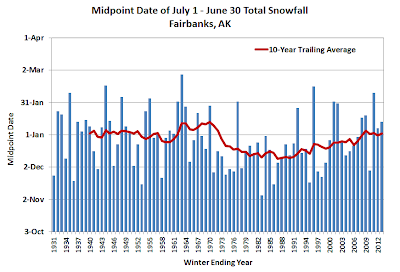 One final thought about the snow depth trend is that measurement procedures could perhaps be subtly changing, leading to a bias in the recent years' observations compared to former years.  I don't think this is particularly likely in recent years, but interestingly the data suggest that something may have changed in or around 1983: consider the chart below, which shows the accumulated reduction in snow depth as a fraction of the total snowfall, through February 28.  I calculated this by adding up all the snow depth losses from day to day each season through February 28; this could be from compaction, sublimation, melting, or even wind redistribution.  Then I divided by the snowfall total, because of course total snow depth loss (mostly compaction) is closely related to the total snowfall.  The chart shows that since about 1983, on average 30 % or less of the snowfall has "disappeared" through these various processes, whereas prior to 1983, the loss was often above 40 % or even 50 %.  It's an intriguing result, perhaps worthy of more investigation; but the simplest explanation may be the most likely, which would be that measurement practices or site exposure have somehow changed. 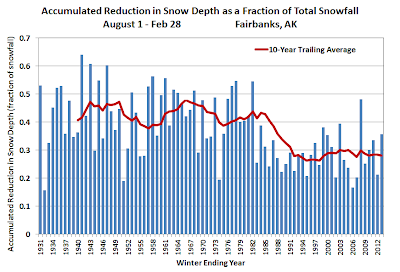 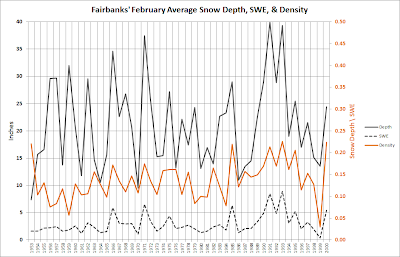