Something that I have noticed over the last several years is a disconnect between the season-to-date snowfall and the snow depth for Fairbanks. Reader Eric also commented in the previous blog post about the normal snow depth and the below normal snowfall. The chart below shows the snow depth surplus/deficit and the season-to-date snowfall surplus/deficit in inches (y-axis). Including this winter, 5 of the last 6 winters show a paradoxical inverse correlation between snowfall and snow depth. This is somewhat puzzling. Is the snow "fluffier"; i.e., more dendrites? Is there less wind to compact the snow? Unfortunately there are no snow water equivalent measurements after 2001. 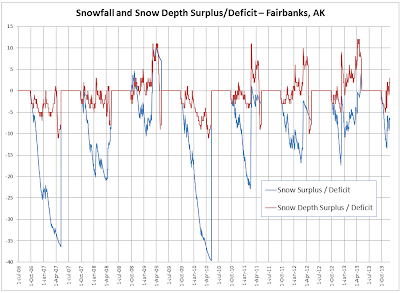 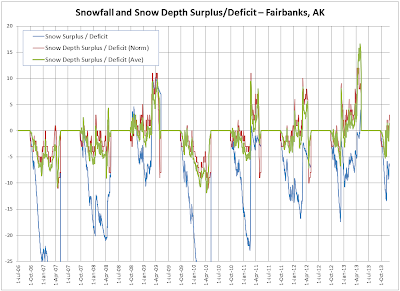