As most readers of this blog know, the formula for calculating wind chill changed in 2001 (a good description of the new formula and the rationale behind the change cane be found here). The Old method was based on a study in 1945 that measured how long it took for water to freeze in various temperature and wind conditions in Antarctica. The study was not intended to determine equivalent temperatures but it was used for that purpose nonetheless and thus the Wind Chill Index (WCI) was born. Due to some glaring shortcomings with the application of the 1945 study to human perception, a series of wind tunnel experiments were conducted and a New Wind Chill Index was formulated and implemented by the NWS in 2001.

The New wind chill formula is actually an equation that was derived from a table with approximately 800 cells based on the wind tunnel experiments noted earlier. The air temperature in the original table ranged from +45°F to -40°F. The equation, however, can be used for any temperature and any wind speed. Clearly temperatures lower than -40°F occur frequently in Alaska. A comparison between the two formulas at 5°F is shown in Figure 1. In general, the New method's values are warmer than the Old values for most wind speeds. However, for low wind speeds, the New method produces slightly colder values since it assumes that the observer is walking at 1.5 m/s. The New method also takes into account the attenuation of wind from the standard measurement height to the space that people occupy.

Unfortunately many people in the general public do not know that this change was implemented and confuse Old and New values. For example, the football game in Cincinnati in January 1982 famously had a wind chill of -59°F at kickoff. However, few people know that using the New wind chill calculation, the kickoff value was 'only' -37°F. Figure 2 was produced by the Green Bay, WI, NWS office comparing the 1982 game with the 1967 Ice Bowl game. Conveniently, both Old and New wind chill values are given. 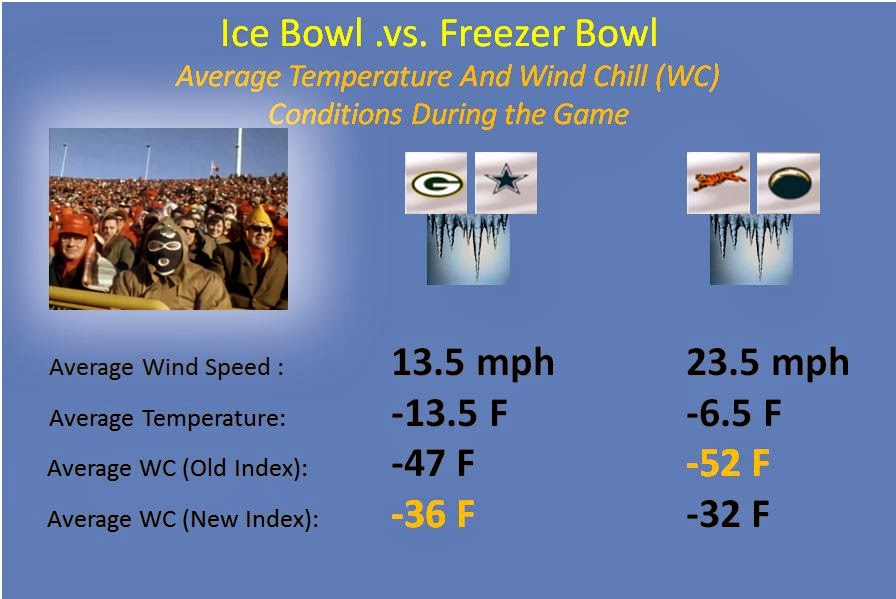 The Howard Pass event of mid-February possibly had a minimum wind chill of -97 (see Figure 3). The -97°F value is 1°F lower than a -96°F wind chill at Prudhoe Bay in January 1989 (Richard has done some excellent analysis and modeling of the Howard Pass event here and here). To confuse matters even more, the Prudhoe Bay wind chill value was originally -120°F since it occurred before the New wind chill formula was developed and implemented. In fact, there were several stations in January 1989 that had a wind chill of -120°F; including Barter Island and Cantwell. However, when using the New formula, the Prudhoe Bay value of -96°F bested the Barter Island and Cantwell readings. 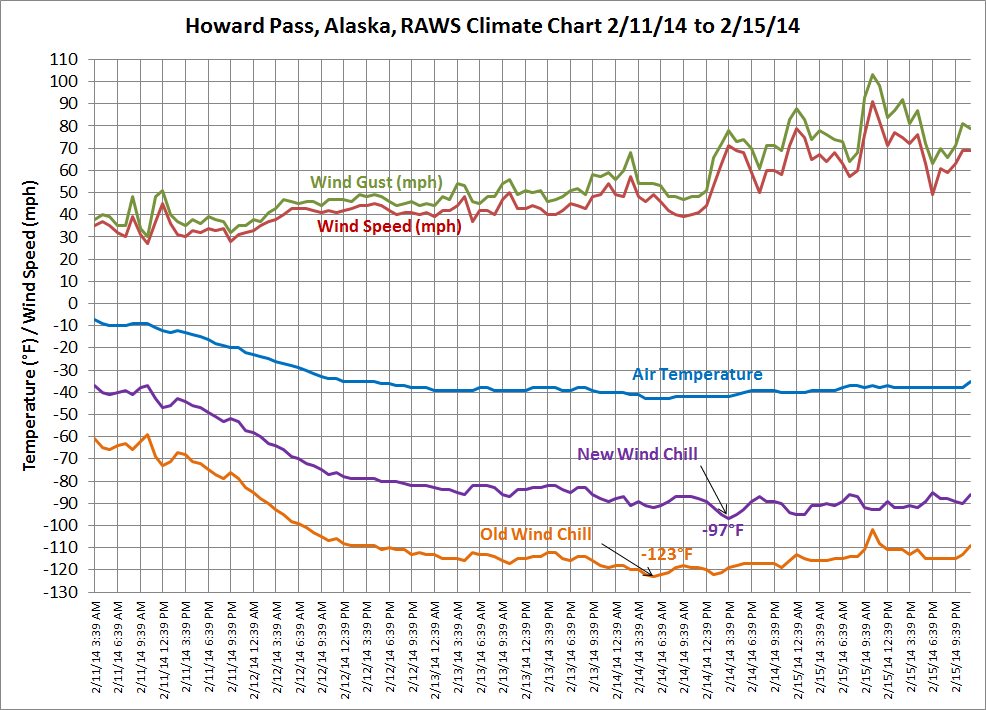 I did some digging around at the NOAA hourly observation site and decided to download all data for stations on the North Slope. None of the North Slope stations have ever recorded a wind chill lower than the -96°F in January 1989 at Prudhoe Bay. Of course the completeness of the data leaves a lot to be desired.

It was apparent that most North Slope stations recorded their lowest ever wind chill in January 1989. Therefore I also downloaded all data for stations across Alaska with hourly observations in January 1989. 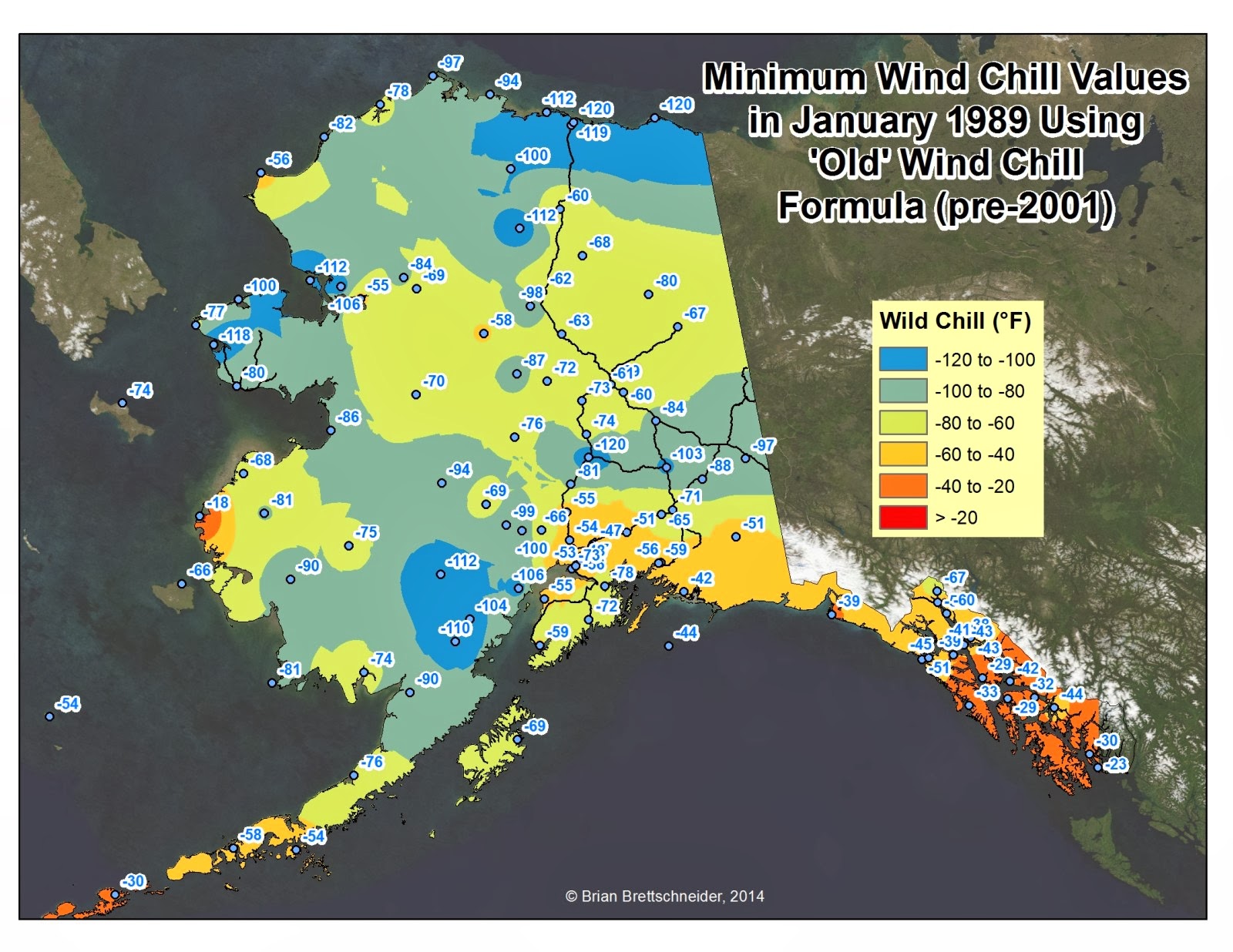 Fig.4. Minimum wind chills in January 1989 for all stations in Alaska that reported hourly observations using the Old formula. In many cases observations are missing so a few data point should be considered suspect. 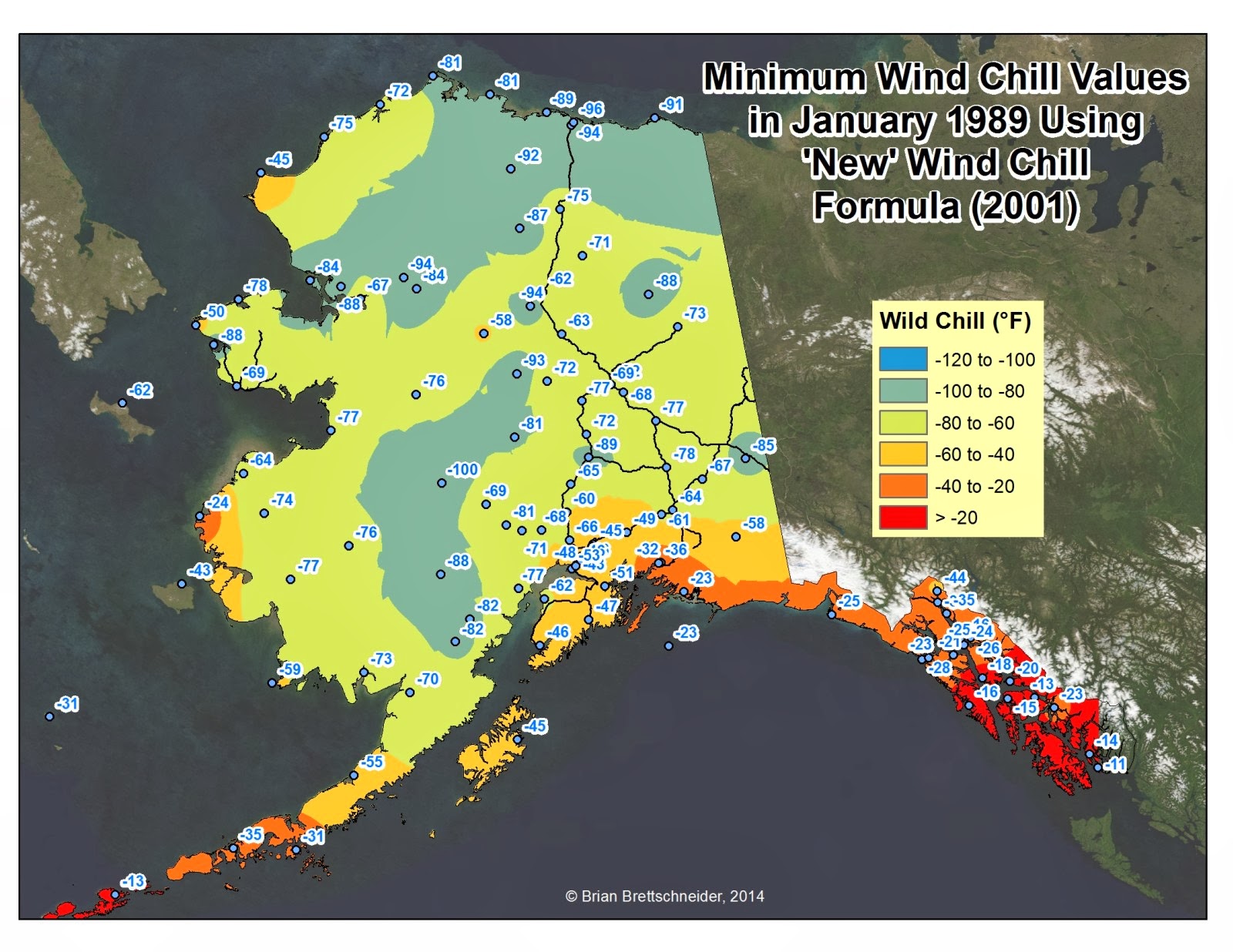 Fig.5. Minimum wind chills in January 1989 for all stations in Alaska that reported hourly observations using the New formula. In many cases observations are missing so a few data point should be considered suspect.

As you can see, no portion of the state escaped the brutally cold wind chills. The color scale on both maps is identical. What stands out on on Figure 5 as compared to Figure 4 is, 1) the overall lower values, and 2) the evenness of the distribution. The -100s along the North Slope and in Bristol Bay were replaced with -80s and -90s. Also, the -70s in the Interior were replaced with -80s in many cases. As stated earlier, at low wind speeds, the New wind chill values are actually colder than the Old wind chill values. 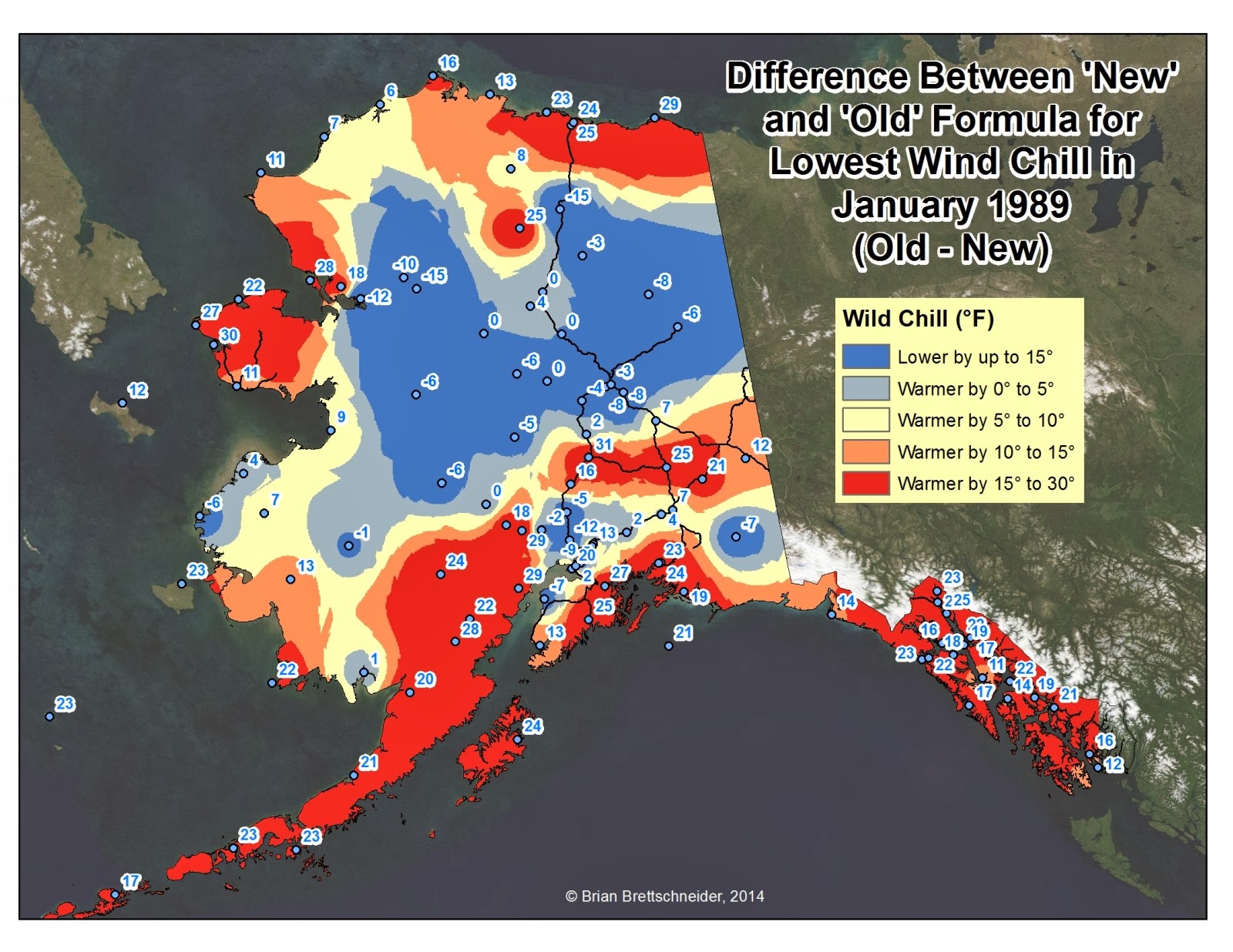 Fig. 6. Difference in the lowest monthly wind chill value in January 1989 using the Old and the New methods.

If you looked closely at Figure 5, you might have noticed the January 1989 minimum value for McGrath was -100°F. That is not a mistake. At 6 a.m. on January 27th 1989, the air temperature was a chilly -72°F with a wind speed of 7 miles per hour. According to the New wind chill formula, it felt like -100°F. Using the old formula, it felt like -94°F. Therefore, when the formula changed, McGrath went from middle of the pack to 1st place. Not just first place in January 1989 but possible first place all time. In addition to January 1989, I also downloaded hourly observations for any station that recorded an air temperature of -65°F or colder in any year (sub -100°F wind chills can occur with temperatures warmer than -65°F but the amount of data was far too large so I cut it off at -65°F). There was one other instance of a sub -100°F wind chill (-106°F to be precise) but its reliability is in doubt. Rick is doing some checking on it since that station does not have any other wind chills lower than -92°F. That will probably be the subject of another blog post.

Figures 7 and 8 show the hourly observations for McGrath and Prudhoe Bay respectively on January 27th and January 28th, 1989. 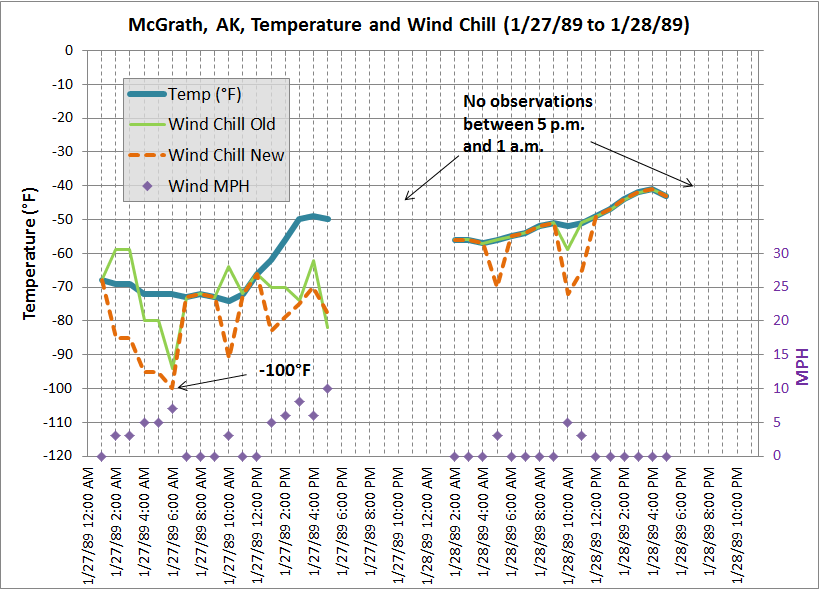 Fig 7. Hourly temperature and wind speed for McGrath, Alaska, on January 27 and January 28, 1989. Both the New and Old wind chill values are displayed. The -100°F value using the New formula is shown. 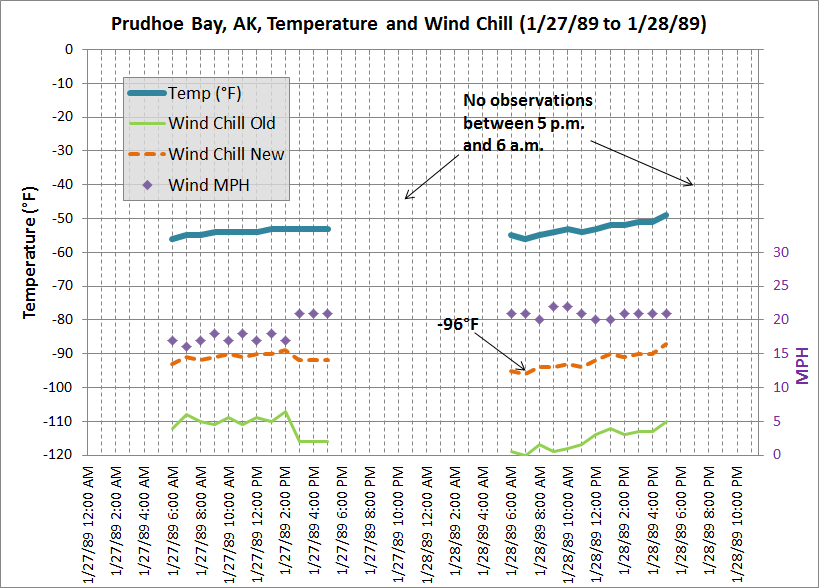 Fig. 8. Hourly temperature and wind speed for Prudhoe Bay, Alaska, on January 27 and January 28, 1989. Both the New and Old wind chill values are displayed. The -96°F value using the New formula is shown.

Is the -100°F at McGrath a populated station record?

That is an interesting question. For starters, it is worth noting that the original research that went into developing the new wind chill formula did not use air temperatures lower than -40°F and that the fitting of a formula to the observational data is the only reason it can be extended backward. Nevertheless, one of the pioneers of the New wind chill research, Randall Osczevski, discusses the New formula (which was actually developed in the 1990s) in this paper and uses values as low as -100°F with air temperatures as low as -60°F. He also discusses how the New formula is more realistic at extreme low temperatures. Also, since NOAA calculates wind chill values for any temperature and any wind speed, we can assume an implicit endorsement of the formula at extreme low temperatures.

The Alaska NWS offices do not issue Wind Chill Advisories or Wind Chill Warnings unless the sustained winds are, or are forecasted to be, 15 mph or greater for at least three hours. Maps of all Alaska advisory criteria can be found HERE. So, can a wind chill be a record if it wouldn't even qualify for a Wind Chill Advisory? Should there be a minimum wind speed criteria?

Several NWS offices have lists of statewide wind chill records. When the Minnesota Climatological Working Group discussed extreme wind chills, several examples they gave used wind speeds of 6 or 7 mph. The Montana Climate Atlas uses 10 mph as a threshold for their monthly probability maps. However, it is unclear whether the record lowest wind chills (see Fig. 9) also used the 10 mph threshold. Since it was unstated, my guess is that they did not. 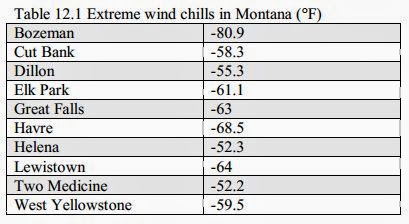 The NWS office in Lacross has a climatology of wind chills in the Northern U.S (Lower 48). They use a 10 mph filter do develop their probability maps. In their report, they state, "[t]his speed was chosen as it is the minimum threshold currently used throughout most of the NWS for the issuance of Wind Chill Advisories or Warnings." Since their report is looking at climatological probabilities, it makes sense that they have a wind speed cutoff. Their report does not contain a list of extreme wind chills.

The NCDC's State Climate Extremes Committee does not keep track of wind chill records and as far as I can tell, no standards exist. Wind chill is a human construct and is therefore not directly measurable with a calibrated instrument. My guess is that wind chill records will always remain unofficial.

To my knowledge, no one has questioned the measurements in McGrath. It is a first-order station and the NWS had an observer in McGrath at the time. Therefore, we can assume that the measurements and calculations are correct. In my opinion, any list of extreme wind chills should have all valid calculations included, regardless of the wind speed. If the wind chill made the temperature feel like -100°F, then that should be on the list ahead of the -96°F at Prudhoe Bay and the -97°F at Howard Pass (if verified).
Posted by Climatologist49 at 9:33 PM