A few weeks ago reader Mike suggested that we take a look at the great chinook event of December 1934, which brought record-breaking warmth to interior Alaska and led to the only "brown" Christmas in Fairbanks history.  The magnitude of the warm anomaly was so extreme that nothing really comparable has happened in the 8 decades since.

To set the stage, Fairbanks had experienced a dry early summer (4th driest June on record) but a rather wet August, followed by a mild and very dry autumn (2nd driest October-November on record).  By November the Pacific Decadal Oscillation (PDO) phase was significantly positive, as cool ocean temperatures dominated the central North Pacific and waters were relatively warmer along the North American coast (see figures below).  However, temperatures in the tropical Pacific were near normal, with neither El Niño nor La Niña conditions in play.  The Atlantic Multidecadal Oscillation (AMO) was in a long-term positive phase, but Atlantic waters were not particularly warm overall in late 1934, and the 1934 Atlantic hurricane season had been inactive compared to surrounding years.  In the lower 48 the summer of 1934 was extremely hot and dry as the Dust Bowl drought intensified. 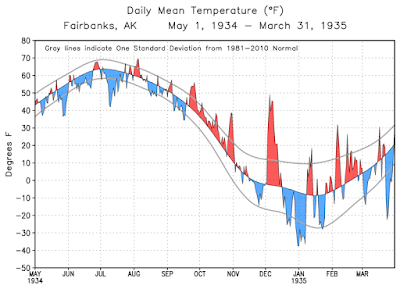 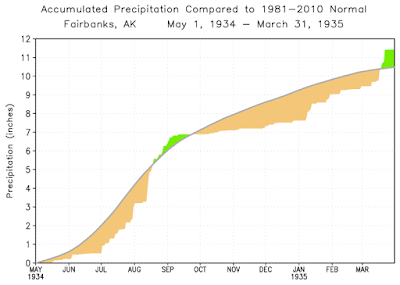 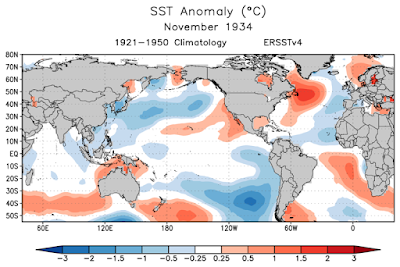 The synoptic conditions that led to the December chinook and heat wave are illustrated in the figures below, which are taken from the 20th Century Reanalysis.  The left column shows maps of daily mean 500mb height from December 1-10, and the right column shows the corresponding maps for sea-level pressure.  As we would expect, the event involved an intense trough over the Bering Sea and an enormous ridge over southeast Alaska and western Canada, with an extremely strong and persistent pressure gradient between the two features leading to southerly flow from the sub-tropics into far northern latitudes. While the magnitude of the anomalies was huge, the persistence of the setup was perhaps even more astonishing.

The highest temperatures observed during the period December 1-10 are shown in the map below.  The interior Alaska "winner" was Nenana, with 61°F on December 8.  Fairbanks reached 58°F on the 5th, but even more remarkably exceeded 50°F for 5 consecutive days from the 4th through the 8th.  These are the only December days in Fairbanks history to have reached 50°F, and only a couple of other days have exceeded 50°F from November through February (November 25, 1936 and January 16, 2009).  The highest temperature observed statewide was 64°F at Sitka Magnetic Observatory on the 8th. 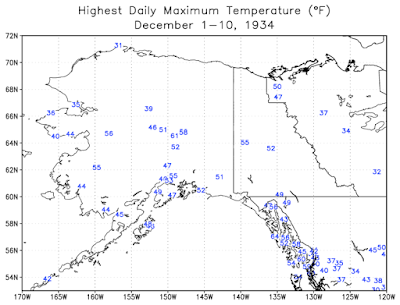 Overnight minimum temperatures were also extremely high for the time of year, with Fairbanks recording its only instance of a 40°F daily minimum temperature between October 21 and April 18.  The ability of temperatures to stay so high throughout the long hours of December night was aided by the elimination of snow cover with the first 50°F day on the 4th, and the snow cover was then reported at zero from the 5th through the 11th.  The rapid loss of snow cover was in turn helped by the lack of earlier snow pack resulting from the dry autumn; there was only 1 inch on the ground on November 28, and a few inches that fell just prior to the chinook quickly melted out.  Snow cover was not regained permanently until December 26, so Fairbanks missed out on a white Christmas for the only time in its history. 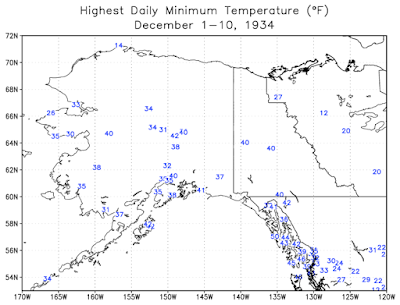 The magnitude of the warm anomaly can also be appreciated by comparing the observed temperatures to the 1981-2010 normals.  The December 5, 1934 daily mean temperature of 49°F was 51.6°F above the 1981-2010 normal, which is the largest warm anomaly of any day in Fairbanks history.  Of course the modern climate is warmer than that of the early 20th century - the difference is about 5°F in December - so actually the anomaly was more like 55°F in comparison to the earlier normal.  I would guess that the list of places in the world that have ever been 55°F above normal is fairly short.

Reader Mike speculated that such an anomalous event might occur about once every 200 years.  If we assume the true peak daily anomaly was +55°F, and if we assume the variance is unchanged over time, then the December 5 anomaly was a little less than +4 standard deviations.  In a Gaussian distribution, a +4 SD anomaly would occur once every 31574 days on average, or once every 86 years; so the chance of this happening in any one winter (November-March) might be about 1 in 200.  Good guess, Mike!  The only additional comment I would make is that this is just a rough estimate, because the temperature variance is unlikely to be stable over time; it is subject to long-term trends and also probably depends on multi-decadal or longer timescale behavior of major climate phenomena like the PDO or ENSO.  As I suggested here, it seems that the climate regime of the 1930s may have favored high-amplitude circulation anomalies near Alaska, and of course it may not be a coincidence that the Dust Bowl occurred in the same decade.