Last year I wrote a post on the accuracy of the NCEP global reanalysis temperatures and precipitation for Fairbanks, and it turns out that a paper has recently been published by UAF researchers on a similar topic.  Lader et al (2016) looked at 5 different reanalysis products and attempted to assess their accuracy for statewide historical temperature and precipitation.  The general conclusion is that there is no one reanalysis that is universally best, as each one has different biases, but for specific purposes it is possible to identify which products are superior; for example, NASA’s MERRA reanalysis appears to be the best for wildfire concerns (late spring and summer interior temperature and precipitation).

An aspect of the paper that caught my eye was that they used an independent high-resolution gridded analysis of Alaska temperature and precipitation as the “ground truth” for measuring the error in the various global products.  (They also separately looked at station observations, so the overall assessment was based on both sources of verification data.)  I had not previously come across the high-resolution gridded data, so I downloaded it from NOAA (source) and took a quick look.  The development of this data was described in a paper last year by Hill et al.

The maps below show the 1981-2009 average temperature for January and July according to the high-resolution analysis.  (The data extends from 1961 to 2009 at 2 km resolution.)  The January map appears to show some kind of discontinuity along the Alaska-Yukon border, which is troubling; I can’t imagine what would cause this.  Other than that, however, the analysis looks reasonable and of course it shows lots of nice spatial detail; it is fundamentally based on the PRISM model, which is a state-of-the-art statistical technique for estimating localized climate variations, particularly in regions of complex terrain (see e.g. here and here). 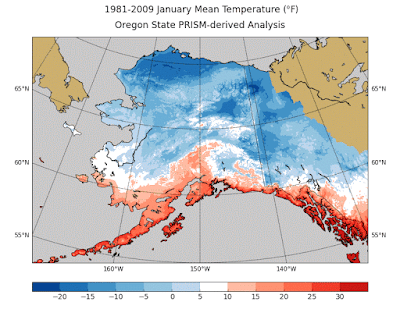 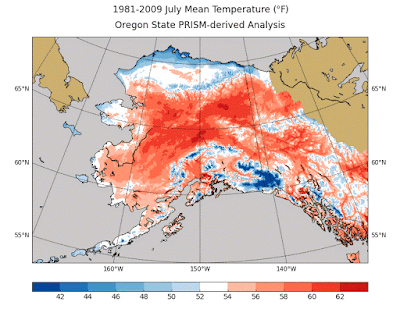 The January and July normals for the Fairbanks area also look OK – see below. 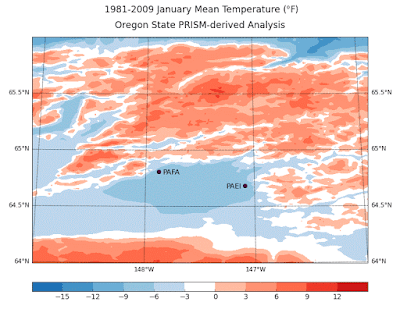 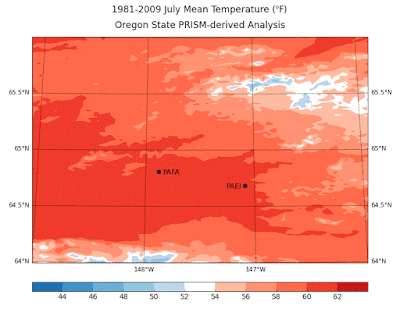 To look more closely at the local accuracy of the gridded analysis, I pulled out the closest grid points for Fairbanks airport and for the Keystone Ridge co-op site.  There is more than 1100' elevation difference between these two sites, so it is interesting to see if the analysis adequately represents the temperature differences.  The charts below show the January and July mean temperatures at the two sites for the common periods of record in both gridded and observed data. 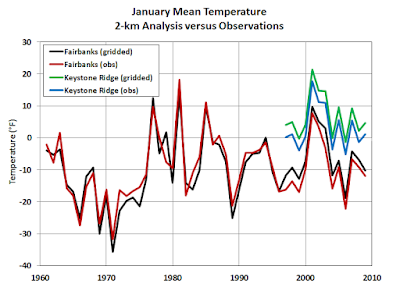 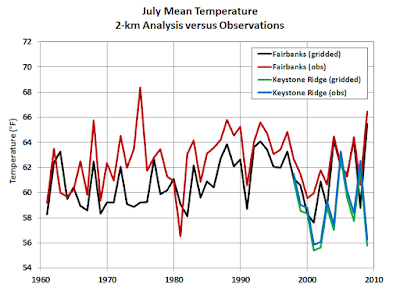 For Fairbanks airport, the correspondence between modeled and observed temperatures is very good in January, with almost no bias and a high correlation, but the analysis is much less good in July, with a correlation coefficient of only 0.64 - and the gridded analysis is more than 1.5°F too cold on average.  At Keystone Ridge there is a January warm bias of nearly 4°F over the short period of record, but the correlation is virtually perfect in both January and July.  It's worth noting too that the mean temperature difference between the two sites is only about 0.5°F different from reality, both in January and July - so the vertical gradient of temperature is correctly represented.

The correlation between gridded and observed monthly temperatures for the two locations is shown below.  We see that July is the worst performing month at Fairbanks airport (matching what we saw for the global reanalysis), but the correlation is almost perfect for Keystone Ridge throughout the year.  The latter result is interesting, because the starting point for the 2-km analysis was the PRISM 1961-1990 normals, which would not have included any data from Keystone Ridge.  However, Hill et al (2015) added observed monthly anomalies to the PRISM normals, so they obviously included the Keystone Ridge data; and it would seem that no other stations were close enough to dilute or modify the Keystone Ridge signal - otherwise the analysis would not show a perfect fit at that location. 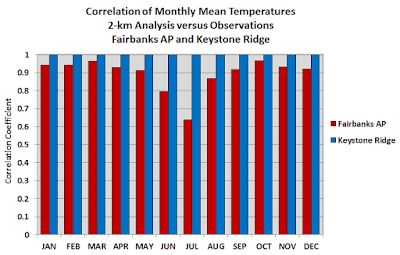 Presumably the reason that Fairbanks AP fails to show a perfect fit is that there are many other nearby valley-level stations, all reporting slightly different anomalies from each other month by month, and when many of them are combined in an objective analysis scheme, the result is less than perfect at any one of the stations.

A better test of the gridded data would be to compare results for a station whose data did not make it into Hill's analysis, but we would need to see his list of stations in order to know where to start.

In conclusion, a first look at this high-resolution gridded historical data leaves me impressed and eager to see this kind of product undergo further development.  It would be nice to see the Alaska PRISM normals updated for a more modern era (rather than 1961-1990) by taking advantage of the wealth of RAWS data that is now available, and it would also be great if a near-realtime update could be achieved.  Anyone looking for a graduate thesis project?