Saturday's thunderstorm in Fairbanks ended up becoming a prolonged and significant rainfall event, with continuous rain and (later) drizzle from about 6:30pm Saturday through 4:30pm Sunday.  The calendar day rainfall total of 0.95" on Saturday was a record for the date, and it is the earliest in the year that such a large rainfall amount has been observed in a single day (1930-present).  About 75% of such events occur in July and August, and the latest date for such a rainfall event is September 27.

As reader Gary noted in comments, the initial round of rainfall was convective in nature with storms forming to the southeast and drifting west-northwest.  A steady rain then followed for many hours.  Here are simple radar animations for two consecutive 90-minute periods.

We've noted before that easterly winds aloft are relatively more favorable for precipitation in summer than in other seasons, although a westerly wind regime is still the most favorable.  In the recent event the 700mb wind direction was close to easterly but not particularly strong; there was a weak pressure gradient between a low to the southwest and a weak ridge to the northeast.  Here's the 500mb analysis from 3am AKST on Sunday morning. 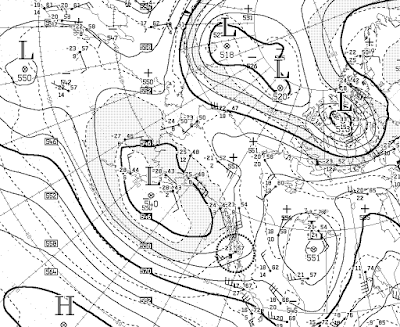 Update June 15: here's Saturday's 4pm AKDT sounding from Fairbanks.  It appears the balloon was actually released at 3:04pm, which was exactly one hour before the ASOS first reported lightning.  The sounding shows very little instability, but forced lifting during the subsequent hour could well have transformed the temperature profile into something more unstable.  Another possibility is that higher low-level moisture was available nearby but was not sampled by the balloon.  Given sufficient moistening at low levels, the sounding could become very unstable.