At the end of May we noted a severe shortfall of Arctic sea ice, but the analysis was subject to some uncertainty because of an emergency transition between satellite instruments.  As of a few days ago the NSIDC has declared that the data from the new instrument is being properly calibrated, and the May sea ice data has been released.

As expected, the mean Arctic sea ice extent for the month of May was extremely low - the lowest on record for May, and nearly 5% below the previous May record.  In fact, it was the lowest monthly anomaly in the entire satellite record in terms of standard deviations below the 1981-2010 mean.  The chart below shows the monthly standardized anomaly since 1979; last month narrowly beat out August 2012, which was 3.39 SD below the mean.  It may be fair to say that Arctic sea ice has never been in worse shape during the satellite era. 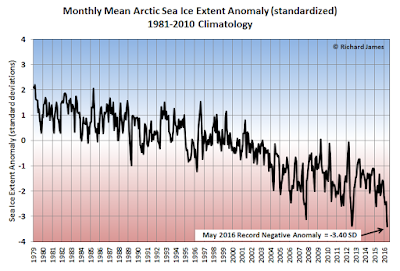 In last month's post I speculated that a very low rate of melting would be needed this summer to avoid a record low ice extent in September; but it turns out that this is not quite right.  To match the 2012 record minimum, we would need a decrease of 8.4 million km2 in mean monthly ice extent from May to September, but only 3 years have seen that much melt in the past.  If we take the average May-September ice loss from the last 10 years, then this September's mean extent will be 3.90 million km2; this would be above the 2012 record minimum but below the 2nd place year, 2007.

The chart below shows the May and September ice extent for each year back to 1979; notice the big jump in summer melt rate in 2007.  Assuming that this year is likely to be similar to recent years, I would estimate a chance of 25-50% that 2016 brings a new record minimum in September.  The latest daily update (also see below) from NSIDC indicates that ice extent is now equivalent to this time in 2012 - which is a big improvement from last month. 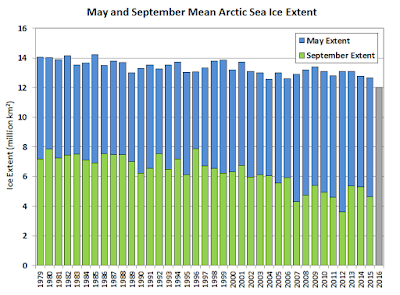 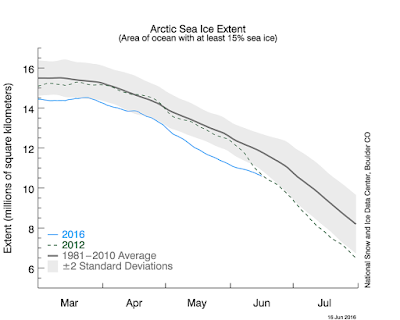