Longer nights, clear skies, and lower humidity have finally allowed cooler nights to arrive in the Fairbanks area, including the first hard freezes of the season in the colder spots.  The first 32°F temperature showed up at the Goldstream Creek COOP on August 29, which is much later than usual.

Strictly speaking this is not the latest date for a reported first freeze in the Fairbanks area, but a straightforward historical comparison is not possible because there was no data in earlier years from the coldest spots like the Goldstream valley.  Based on the recent climate one might think this year's late freeze is unprecedented, but it is possible that some earlier years remained freeze-free around the area to an equally late date.  For example, in 1942 the 3 active observing sites didn't drop below 40°F until September 5, and the urban heat island was less significant back then.

One aspect that is definitely a record is that Fairbanks airport did not drop below 45°F until August 31 this year; the previous latest was August 28, in 2004.  The first freeze at the airport is probably still some days away, as the median date for this event has been September 15 in the last 20 years.  The chart below shows the date of the first 32°F temperature after July 15 for 3 stations around the area. 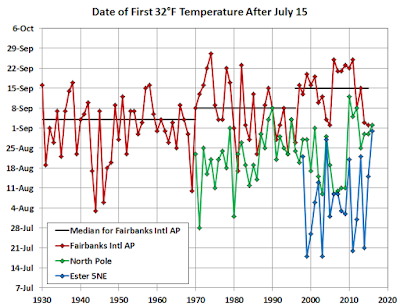 Posted by Richard James at 4:34 AM