Last month I introduced a set of 19 climate observing sites around the periphery of the Arctic Ocean that allows us to get a reasonable picture of basin-wide temperature variations in the context of historical observations stretching back several decades.  This is rather useful because reanalysis estimates of temperature are subject to model error and bias, including sometimes errors in the long-term trends.  Of course measurements at surface observing sites have their own quality concerns including sometimes significant urbanization influences (e.g. at Utqiaġvik/Barrow).

The chart below shows the November mean temperature for each year since 1971, and just as for October the warmth this year stands out as unprecedented in the modern era.  The November mean anomaly (departure from normal) of +6.7°C was nearly 3°C higher than the previous warmest November (2012, +3.9°C).  This November's anomaly was also greater than October's anomaly (+5.6°C) and higher than that of January 2016 (+6.5°C); this makes November 2016 the warmest calendar month relative to normal in the data set. 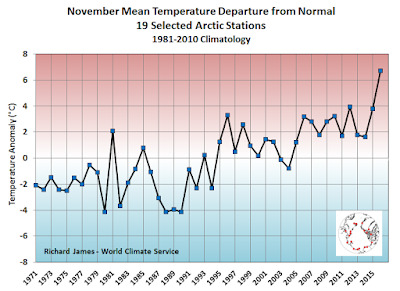 The daily temperature analysis (see below) shows that peaks of basin-wide warmth occurred at the beginning of the month and around the 20th of the month.  By the end of November the anomaly was fading as more normal conditions returned to the Arctic overall, but nevertheless the mean temperature has remained above normal every day. 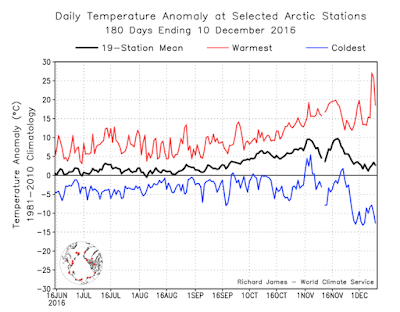 A couple of the stations (on Russia's central Arctic coast) have become more than 10°C colder than normal in the past couple of weeks, but other sites have remained extremely warm relative to normal; for example, Ambarchik on the coast of the East Siberian Sea reported a daily high temperature well above freezing  (+40°F) last Thursday (December 8).  For Ambarchik last Thursday, the daily mean temperature's departure from normal was an extraordinary +27.1°C (+49°F), which ties the most extreme daily warm anomaly for any of the 19 stations since 1971; the record was previously held by Deadhorse (Alaska) on January 15, 1997 (49°F warmer than normal).

The NSIDC's latest report provides additional context on November's Arctic weather patterns and the state of sea ice.  November's Arctic sea ice extent was the lowest on record for the month, and the monthly ice extent remains more than 3 standard deviations below normal (although not quite as anomalous as during October).

Although not directly related, the ice conditions in the Antarctic are so unusual that they also deserve a mention; the November mean ice extent in the south was by far the most anomalous on record (for any month) at 5.7 standard deviations below the 1981-2010 normal.  This year's conditions are an extreme outlier compared to the climate of the last few decades, as seen in the NSIDC's graphic below.  On a global basis, sea ice extent in November was an astonishing 7.2 standard deviations below the 1981-2010 normal. 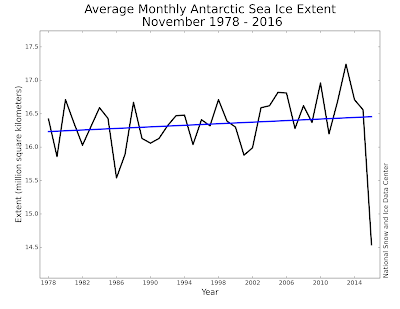 Posted by Richard James at 4:23 AM