Hi, Rick T. here, and happy winter solstice to you and yours. Outside, winter solstice is often thought of as the first day or winter, but in Alaska, this day is a big deal because of the solar aspect. After all, we've had "winter" weather for months, and no sourdough would confuse the dim of late December with blinding sunshine of late-February. Symbolically, winter solstice is the darkest day of the year, though in fact several days around solstice are effectively the same. Here in Fairbanks, the sun will be above the horizon for 3 hours and 43 minutes, the brightest stars are visible on a clear solstice morning until almost 10am, and reappear by 345pm. Early in the 20th century, winter solstice fell on December 22 more often than not, becoming more common on December 21 as the century progressed (as reckoned as the day of occurrence in Fairbanks based on the time zone in use at the time). This is due in part to the slow precession of the earth's axial tilt and in part to the multiple time zone changes.

So, just for fun, here's a plot of daily temperatures on winter solstice day in Fairbanks since 1904. Some solstice factoids: highest temperature was 42F in 1939; lowest temperature -49F in 1961. Six winter solstices have highs above freezing, and ten have had lows of 40 below or lower. [Note: I've put up a similar version of the plot below on twitter, #akwx] 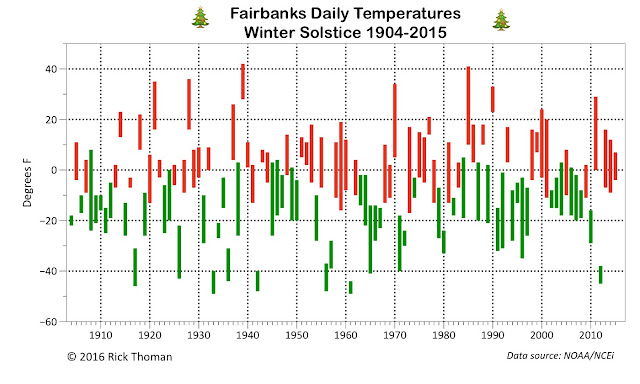