The Chalkyitsik RAWS reported -51°F this morning, which is the lowest observed temperature of the winter so far in Alaska (except for a dubious reading from the Bettles SNOTEL, which seems to have a cold bias).  The Chalkyitsik RAWS is located about half way between Fort Yukon and the village of Chalkyitsik, and is more than 100 feet lower in elevation than the latter.  Climate observations from Chalkyitsik itself were recorded only from 1962 to 1972, and the data are quite incomplete. 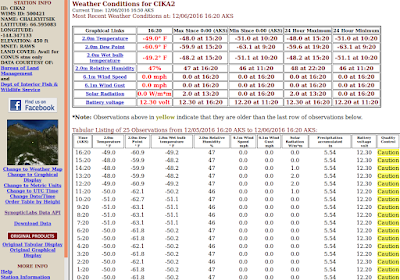 Temperatures in Fort Yukon were nearly steady at around -45°F today.  Below is a simple animation of the south-pointing FAA webcam view during the 3 hours of sunshine.  It's interesting to see the apparent fluctuations in the concentration of condensate or particulates in the shallow surface layer.  I'm not quite sure if the haze is composed of smoke or ice crystals, although the airport reported ice crystals in the air for most of the day, and the reported visibility varied from 0.5 to 2.5 miles.  With a strong temperature inversion undoubtedly present in the lowest levels, the haze was trapped very close to the surface - even below the tops of the trees at times, judging from the visual appearance.  A lot of interesting physics goes on in the surface layer of a winter day north of the Arctic Circle.