Here's a quick update on yesterday's post: snowfall for December is now up to 32.9" in Fairbanks, which is the 4th highest on record (1930-present).  Nearly half of that fell in the last three days.  The airport recorded wind gusts as high as 52 mph early this morning, and sustained winds of 33 mph were measured; this sustained wind speed is the highest since February 2011.  It's also the highest for early-mid winter (pre-February) since 1970.

This morning's sounding showed an extraordinarily strong westerly flow aloft, with 850mb winds of 75 knots (86 mph).  This ties the all-time record for strongest 850mb wind speed in Fairbanks (1948-present); this has been an extreme and historic winter storm.

Returning to the topic of the relationship between snowfall and North Pacific sea surface temperature patterns, the following chart illustrates the unusual nature of this month's heavy snowfall.  The horizontal axis shows the difference between the PDO and NPM index values (PDO minus NPM), and December's snowfall is shown on the vertical axis.  When the PDO is positive and the NPM is negative, as they are now, it is unusual to have significantly above-normal snowfall.  Note that I calculated the linear trend line after transforming the snowfall data into an approximately normal distribution, because ordinary least-squares regression is not suitable for a skewed distribution like we have here (it weights the outliers too heavily). 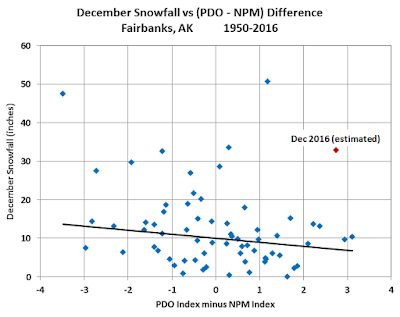