In a change of scene that is no doubt refreshing for some, Fairbanks has seen a significant amount of snow in the past several weeks.  The total so far this month is 16.9", compared to a normal accumulation of just under 10" for the full month of December.  With more snow in the forecast, it looks like this month will beat the 18.6" of December 2012 and become the snowiest December since 1992 (28.5").

Here's a chart of the season-to-date snow accumulation (green line) compared to normal (brown line), recent years, and the historical extremes.  I created the chart on the xmACIS2 interface, which provides a wide variety of handy analysis options.  Fairbanks is still in the lower tercile for season-to-date snowfall owing to the very dry start to winter.

A couple of weeks ago I mentioned that the PDO was still moderately positive, which was interesting in view of the notable cold spell that managed to envelop most of the state earlier this month.  The positive PDO phase also tends to be associated with below-normal snowfall in interior Alaska, as we saw in the past couple of winters; and so the current snowy spell does not reflect the PDO influence.  Furthermore, the NPM (North Pacific Mode) is strongly negative at present, and this too is normally associated with dry weather in winter.

The chart below shows the rank correlation coefficient by month between snowfall and the PDO and NPM index values.  For the November-March seasonal average, the NPM actually has a slightly stronger correlation with Fairbanks snowfall than the PDO.  Given that the current NPM index is among the most negative on record, and the PDO is also positive, it's quite surprising to see a snowy weather pattern emerge in Fairbanks. 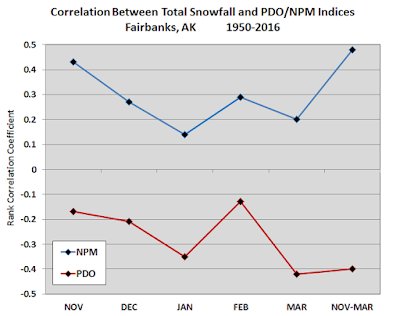 Here's a recent SST analysis, showing North Pacific temperature anomaly patterns that are characteristic of the positive PDO and especially the negative NPM: 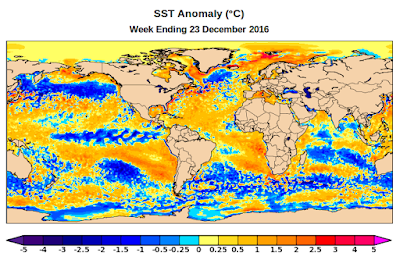 See these earlier posts for more perspective on the PDO and NPM and their impacts: