The Kuskokwim 300 sled dog race occurred over the weekend, with the teams running from Bethel to Aniak and back.  The race is quite notorious for volatile weather conditions, which of course is not surprising as southwestern Alaska is subject to Bering Sea storminess and often experiences highly variable temperatures during winter.

This year the race was a cold one, with temperatures as low as -31°F in Bethel - normally the warmest location on the trail - and as low as -45°F in Aniak.  Looking back at past years, and without accounting for wind chill, this may in fact have been the coldest race in the 38-year history of the Kuskokwim 300.

The chart below shows the average temperature and wind chill in Bethel for each race from 1986-present, based on the 48 hours ending 3pm on the day when the first-place team returned to Bethel.  (I wasn't able to find the dates for the early races from 1980-1985).  Based on conditions in Bethel, this year's race was the coldest, with an average temperature of -25°F.  Mercifully, however, winds were relatively light this year, so the wind chill was not terribly low; the lowest wind chill occurred in 1989, when the race start was postponed 3 days to avoid even worse conditions during the severe cold spell of that January. 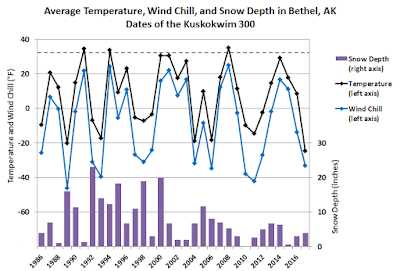 Perhaps the most striking aspect of the chart is the change in snow conditions that has occurred over the past few decades; it's been more than 10 years since the race has occurred with more than 10" of snow on the ground in Bethel, but this was common in the 1990s.  However, a quick look at the longer term history suggests that the 1970s and early 1980s also generally saw low snow depths in late January, so the increased snow in the 1990s may have been more of a decadal-scale anomaly than a reflection of a different climate in the past.

Posted by Richard James at 9:33 AM