It's time for another update on temperatures at selected surface observing sites adjacent to the Arctic Ocean.  For background on the choice of sites, see here.  January was another very warm month, relative to the average conditions of earlier decades, with a mean January temperature more than 4°C above the 1981-2010 normal.  This is down a little from the incredible warmth of last January, but it was still the 5th warmest anomaly of any calendar month in this data set (1971-present).  The top 3 months were November, January, and October of 2016. 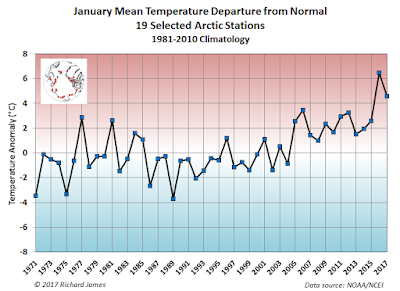 Daily mean temperatures remained well above normal throughout January, and the 19-station mean has pushed back up to nearly +10°C in recent days (see the chart below).  The chart also shows a recent spike up to nearly +30°C in the red line, which shows the warmest of the individual stations on any given day.  This spike reflects extraordinary warmth a week ago at Cape Billings on the northern coast of Chukotka (176°E); the temperature reached the most extreme daily warm anomaly at any of the 19 stations since 1971 (narrowly beating the extreme daily warm anomaly from two months ago - noted here). 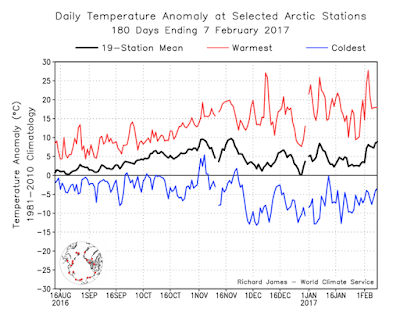 The continued drumbeat of extreme warmth in the Arctic is of course reflected in sluggish growth of sea ice and record low sea ice extent for the time of year, according to the NSIDC's recent update.  January's update from the University of Washington's PIOMAS model indicates that Arctic sea ice volume is likely also at record lows and well below anything observed on this date even in recent warm winters. 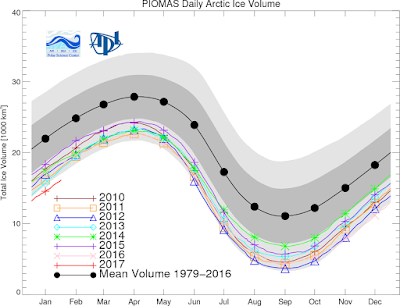