Fairbanks has seen something of a snow onslaught in the past week, with a remarkable 19" of snow over six days, taking the seasonal snowfall total to 78".  This is the highest in over 20 years.

The entire month of February normally only brings about 6" of snow, as the weather usually becomes increasingly dry in late winter.  On average, the heaviest 1-day snowfall in February is 2.5", but Fairbanks just saw 4 consecutive days with more than 2".  Interestingly this has only happened 8 times before since 1930, and never after mid-January.

Another interesting factoid: the months of December through February brought 15 calendar days with at least 2" of snow in Fairbanks this winter, and that's the highest on record; the previous record was 13 such days in December 1936 through February 1937.

The map below shows reported snow depths today.  A remarkable aspect to me is how high the valley-level snow depths are from the Fairbanks area down to Nenana; the snow depths are no greater at some of the elevated Snotel sites northeast of Fairbanks.  Keystone Ridge is reporting 35" on the ground - barely more than Fairbanks airport (32"). 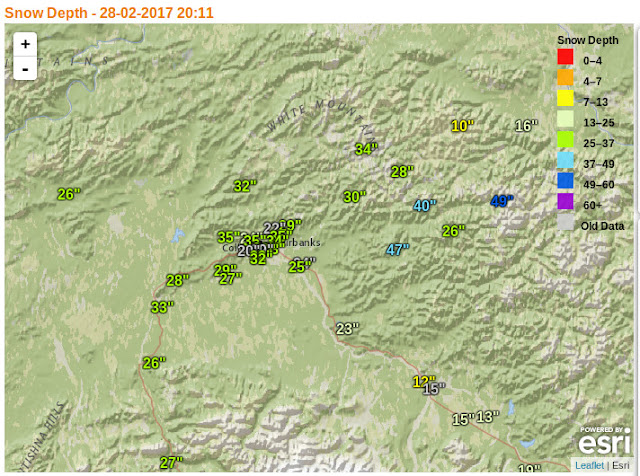 The percent of normal snow water equivalent at the long-term Snotel sites ranges from 112% at Mt Ryan to 198% at Monument Creek. 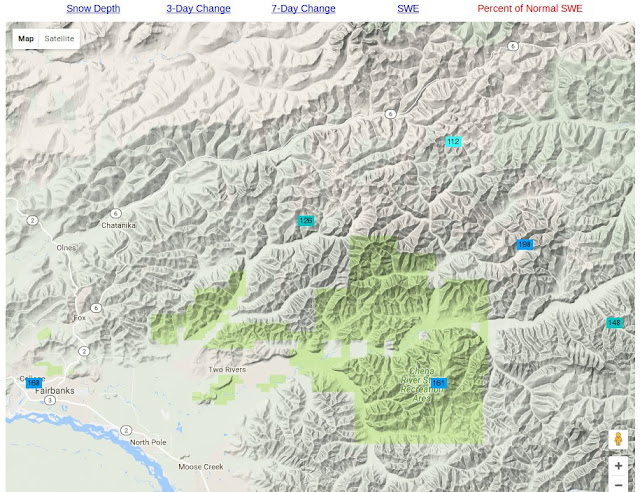 Here's a chart showing the seasonal snowfall totals and maximum snow depth in Fairbanks for each winter since 1930-31; the long-term median values are indicated with dotted lines.  For as unusual as the snow has seemed this winter, the season as a whole is nowhere near some of the extraordinary winters of the past; but what has been very unusual is the concentration of snowfall in the past three months. 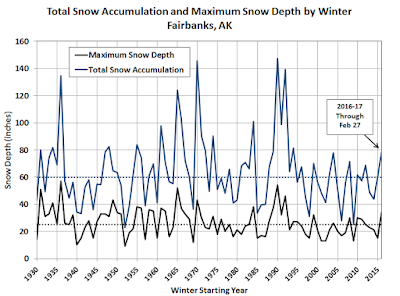