Back in December I mentioned that I had found a way to begin working with land surface temperature estimates from the Suomi NPP satellite (launched in 2011); the modern radiometer on the satellite measures infrared radiation at a spatial resolution of 750m, which allows for nice high-resolution estimates of surface temperatures when clouds are absent.  I've recently also decoded similar data from the MODIS instrument on the TERRA and AQUA satellites, launched in 1999 and 2002 respectively.  The MODIS resolution is about 1km.

Here are a couple of images showing estimates of the minimum surface temperature observed by these satellites on January 18 over the Fairbanks area and points eastward into the hills; this is the day that temperatures bottomed out during the cold snap.  I've interpolated the data to a 750m grid in both cases for consistency (click to enlarge the images).  The similarities are striking, but greater spatial detail is evident in the S-NPP (lower) image, as expected. 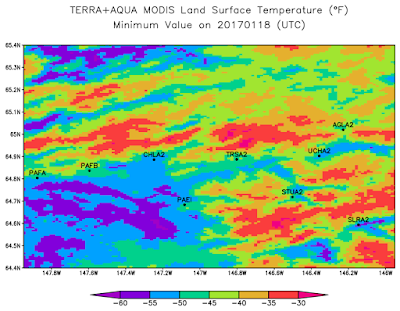 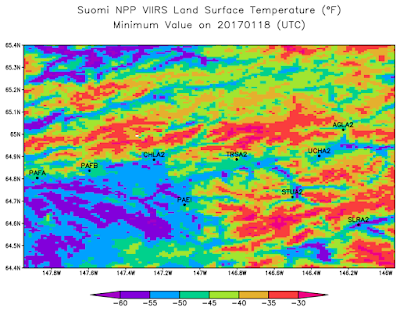 It's gratifying to see that both maps show the cold conditions on the Salcha River in the bottom right; the Salcha River RAWS (SLRA2) reported -59°F, and the satellite data support this very cold reading.  On the other hand, the -65°F reported by the Upper Chena River HADS site (UCHA2) is not supported and was almost certainly in error.

Below is a comparison of the minimum temperatures (in °F) reported at each of the sites marked on the maps.  The agreement is, in my view, quite impressive, with only the Stuart Creek RAWS seeing a substantial difference if we exclude the Upper Chena HADS site.  At both Stuart Creek and at the Salcha RAWS, the estimates are better for the S-NPP, which probably reflects the superior resolution of the S-NPP instrument.