Temperatures are near or above freezing across most of the western half of Alaska south of the Brooks Range this evening, as a very warm and moist airmass has been imported by strong southwesterly flow aloft.  In Fairbanks the temperature has been close to the melting point since around noon yesterday, and today's minimum temperature is so far sitting at 29°F; this is close to record territory for the time of year.  The westerly component of the flow means that it's not a chinook event; in contrast, heavy snow is occurring in many areas.

On another topic, regular readers may recall that a couple of months ago I drew attention to the lack of complete freeze-up on the Yukon River at Dawson.  Remarkably, the same situation is still in evidence, with a persistent lead of open water in the middle of the mighty river.  Here's a webcam image from earlier today. 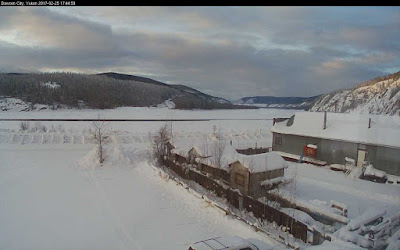 Can the presence of open water be explained in terms of unusually warm weather?  No; the chart below shows the accumulation of freezing degree days this winter (black line) compared to the last 5 winters.  This winter has been colder, on balance, than any of the last 3 winters, and the river did not fail to freeze over in those years. 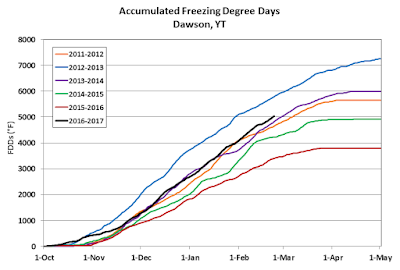 The explanation appears to lie in the early formation of an ice jam a short distance upstream, cutting off the formation of ice floes that would normally provide the building blocks for a complete ice cover.  As the images below demonstrate, the open lead has instead been freezing over from the edges, which is a very much slower process.  It will be interesting to see if the lead manages to disappear before the end of winter; my guess is that next week's much colder weather (indeed perhaps extremely cold) may finally do the job. 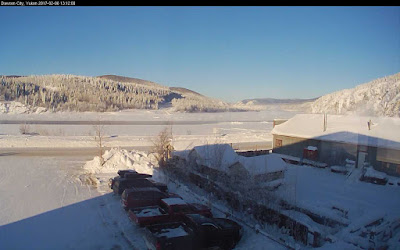 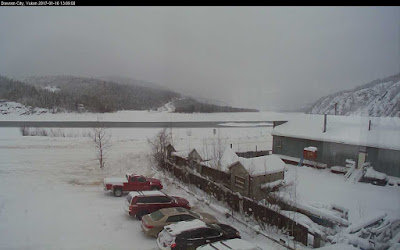 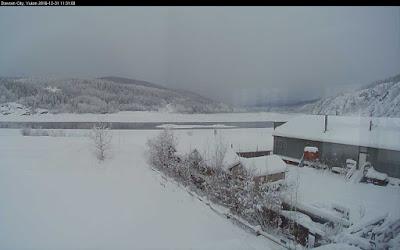