I was going to write a few words on the brief but notable cold spell over the weekend, but the cold has already been eclipsed by an incredibly rapid warm-up over the eastern interior.  The map below show 24-hour high temperatures through 5pm today in the wider Fairbanks area: most places above freezing, and +40's in the hills to the east. 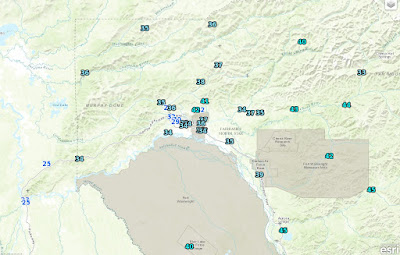 A broader view shows clearly where the southerly chinook flow reached the surface today and, conversely, where it did not; the Yukon Flats have remained cool, and locations west of Fairbanks have been less warm; even Nenana was far enough west to stay 10°F cooler than Fairbanks.  Interestingly the upper Tanana Valley was cooler as well. 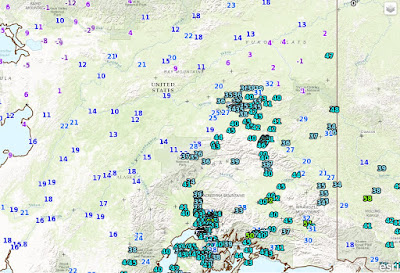 The rate of warming at certain spots has been really remarkable: the Salcha RAWS, for example, warmed from -45°F at 9am on Sunday to +45°F at 1pm today.  This is extreme even by interior Alaska standards.

Here's a sequence of 500mb charts showing the flow adjustment that has brought such a dramatic change of conditions.  The maps are from 3am on Sunday, Monday, and today, respectively; notice the strong upper-level low dropping south over western Alaska, allowing the the flow to pivot quickly to the south across the Alaska Range. 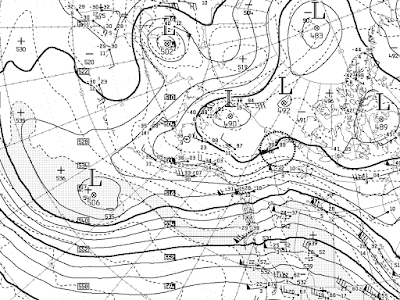 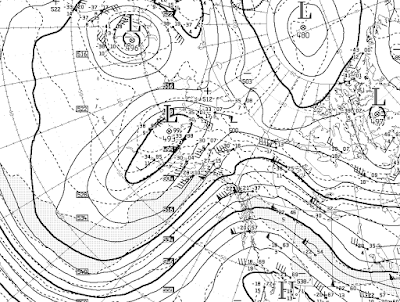 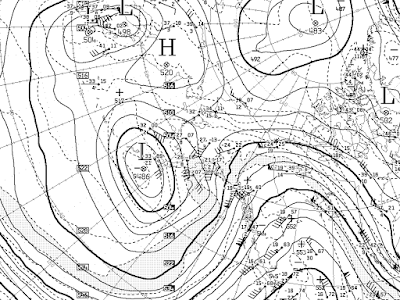 The readiness of the low to drop south appears to have been aided by the deep trough that was already in place over the North Pacific at around 160-180°W (evident in the first map above).  This in turn was favored by widespread below-normal sea surface temperatures in a west-east band across the North Pacific, reflecting the negative NPM phase that has become entrenched this winter.  Here's a recent SST analysis: 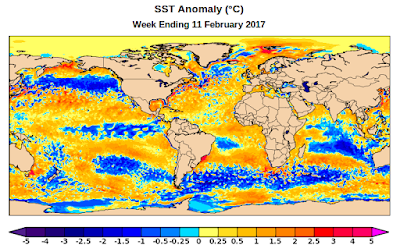 And here's the typical 500mb height pattern when the NPM is strongly negative in February; notice the similarity of the trough position to where the low ended up this morning.  This is a nice example of a single weather event reflecting the favored mode based on long-term (seasonal-scale) forcing mechanisms. 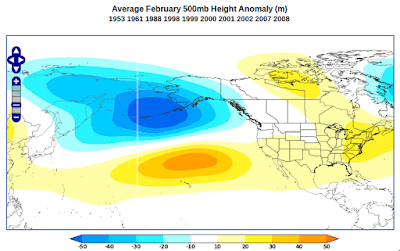