Hi, Rick T. here. One of the omnipresent issues in doing climate-scale analysis for Alaska is the comparatively short record of most variables at most places. So when a chance comes along to extend a record, we jump at it. To that end, yesterday I stumbled across several lists of break-up dates on the Chena River at Fairbanks. The version below was published in the Fairbanks Daily News-Miner on March 19, 1951. You will immediately notice this record starts in 1903 and is unbroken through 1950. In the same issue, the News-Miner also published break-up dates and times for the Tanana River at Nenana, which are the same as we use today and are available from many sources.

Now the Chena River today is a much different watercourse than it was when E.T. Barnette was unceremoniously booted off the Lavelle Young on the south bank of the Chena River on August 26, 1901. For our purposes here, the major event was the 1940s construction of the dike from Moose Creek Bluff across Piledriver Slough, which over time effectively ended the flow of Tanana River water into what today we call the Chena River at Fairbanks (Chena Slough in the early days). More details on this history can be found in this 2000 USGS report on Noyes Slough Restoration Project. So while this list may be primarily of historical interest for Fairbanks, can we use it to learn something about the timing of break-up of the Tanana River at Nenana prior to the start of observations in 1917?

The first thing I did was look at the correlation of the Chena River at Fairbanks dates against the Tanana at Nenana dates for the 34 years of overlapping data, 1917-1950 (plotted below). The correlation is considerably higher than I expected (+0.94), with 1940 (and to a lesser extent 1919) the only significant outlier. In general, break-up on the Chena River occurred a few days before the ice went out at Nenana, but there are several years (e.g. 1919 and 1920) when Chena dates are later than the Tanana at Nenana. So how can we use this to estimate break-up dates 1903-1916, when we have dates for the Chena at Fairbanks but not the Tanana at Nenana? 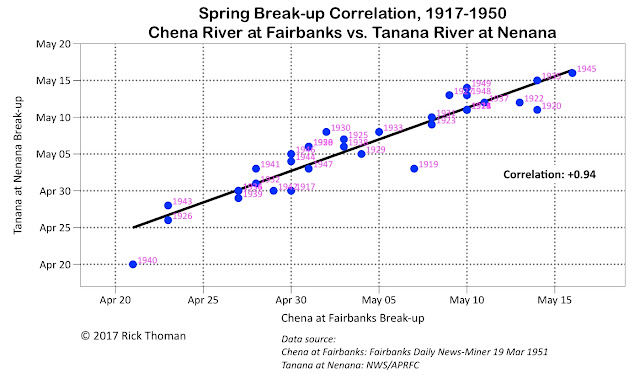 The simplest way is to just apply the regression equation (plotted above) using the 1903-1916 Chena at Fairbanks dates as the predictor. This will yield a single value, but there are of course uncertainties. There are many methods we could use to estimate the uncertainty of the estimated Tanana at Nenana dates, but here I'll simply use the standard errors of the regression coefficients to generate some idea of the uncertainly of our estimated dates. For the 10th to 90th percentile estimate, this turns out to be a bit under three days either side of the mean estimate. Below is a plot with the estimated dates and uncertainty estimates prepended to the observed data. 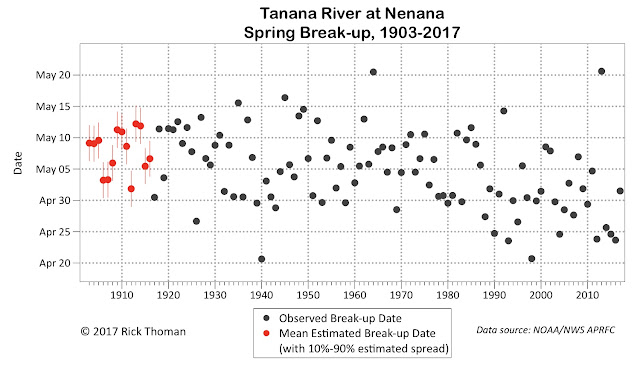 The estimated dates look reasonable when compared with the climate data that we have for the central Interior for this period: there are some cool springs (e.g. 1914) and a couple of warm springs (most notably 1912). All in all, it seems pretty clear that break-up dates on the Tanana River at Nenana in the 14 years prior to the start what we now call the Ice Classic were typical of the pre-World War Two era dates and not like the modern, early break-ups.