Wildfire continues to be the big weather-related story for Alaska, and it's getting bigger quickly, with fire acreage increasing by over 100,000 acres a day in the last week.  Today's AICC report states that over 900,000 acres have now burned this season, i.e. basically in the last 10 days.

Last week I mentioned the dryness in April and May that set up the fire situation in southwestern Alaska, and widespread dryness is now becoming really unusual over a large area.  Fairbanks has had no measurable rain for a month, which is unprecedented for the time of year.  Here's this week's update to the Drought Monitor analysis: 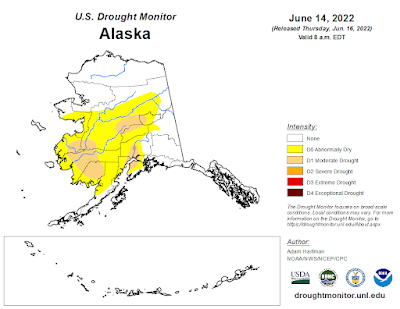 It's not just the absence of rain that has produced very dry fuel conditions; it has also been unusually sunny with low humidity.  Here are charts showing the last 6 months of sunshine and humidity data from the CRN site in the Nowitna NWR (SE of Ruby): 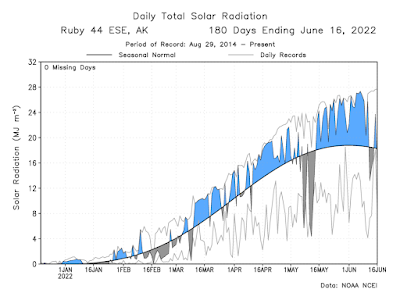 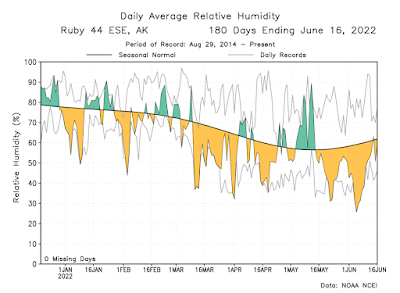 These graphics are taken from my informal Alaska CRN visualization page:

Using temperature and humidity data at 5-minute intervals from the CRN sites, I calculated the vapor pressure deficit since May 1st; this gives a first-order estimate of evaporation rates, excluding effects of sunshine and wind.  The VPD is easily the highest in the short period of record for a number of the sites; for example, here's the May 1 - June 15 average VPD and total rainfall at the CRN site on the Kenai Peninsula. 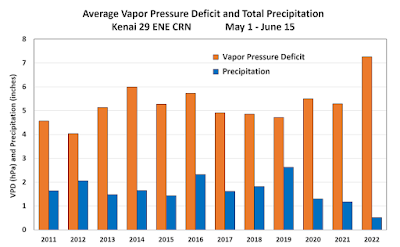