With some help from Rick Thoman, I've managed to get hold of the NWS daily Alaska precipitation analysis data, i.e. the precipitation estimates that are displayed by the Alaska-Pacific River Forecast Center at: 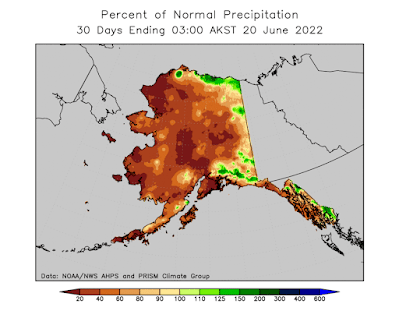 That's a lot of dry.  Fairbanks picked up its first measurable rain in over a month yesterday, amounting to 0.35", but most locations around the area didn't see that much.  Here are estimated totals from the last 7 days: A couple of cautionary notes about the data: first, obviously, there are very large areas with little or no data, so don't be impressed by the level of detail on the maps.  The analysis method takes the often-scarce observations and uses the high-resolution PRISM normals to create a best guess of how the precipitation may have varied depending on elevation, terrain orientation, and so forth.

The other note is that the analysis uses only automated observations, because the daily analysis is valid for 1200-1200 UTC, or 3am-3am AKST.  Manual observations like co-op or CoCoRaHS are not included.

The 90-day maps show less than 0.75" of liquid-equivalent precipitation in the Y-K delta region, and less than 20% of normal near Bethel and a few other spots around the state. 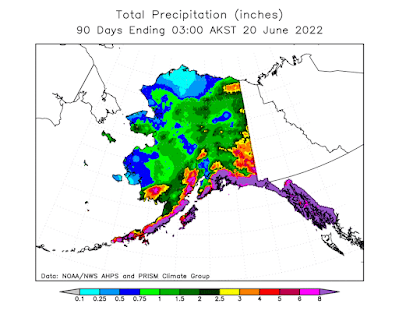 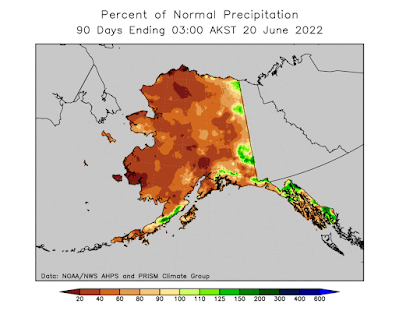