From the Sublime to the Ridiculous: Record Warmth 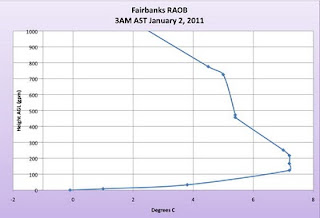 The Chinook broke through to the surface late Saturday evening and the temperature leapt to 41F at the airport at 3am Sunday, tieing the record high for January 2nd. The morning RAOB tells the story. Actually, at the time of balloon launch it was already in the upper 3os at the ASOS; the upper air building, being in a low spot, still clung to to the inversion at the time of launch (218am AST). Since 7am the winds have died off and skies cleared, so the temperature is back down in the teens at the airport.
Posted by Rick at 10:43 AM