The National Snow and Ice Data Center has released their August analysis of sea ice cover in the Arctic. The mean ice coverage for the month of 5.52 million sq km is the second lowest of the satellite era (since 1979). There is the plot of NSIDC of the August mean coverage: the trend is stunning. 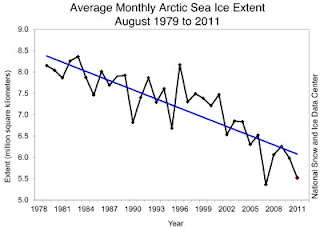 The press release also notes that as of September 5th the coverage had fallen below the minimums measured in both 2008 and last year, guaranteeing that 2011 is at least the second lowest minimum coverage of record. Here is the coverage plot for September 6th from the University of Illinois Polar Research group. 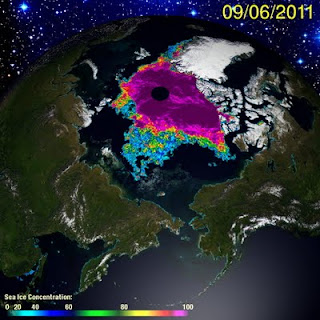 The ice melt season has about two weeks to go, and is certain to be very close to the 2007 record minimum. The implications for Alaska weather and climate are, of course, large. The fact that Barrow has not had a temperature of freezing or below since July 9th is directly attributable to the lack of near shore sea ice and the "warm" waters offshore (as of Seep 6th the NWS Anchorage Marine Ice program had sea surface temperatures of about +6C near Barrow).
Posted by Rick at 8:39 AM