It looks like the minimum Arctic Sea Ice coverage has been reached. The National Snow and Ice Data Center reports a coverage of 4.33 million square kilometers on September 9th, with coverage having increased slightly since then. Here is the Alaska-centric view from September 14th from the University of Illinois Polar research group. Notice how far beyond the coast the ice edge is: 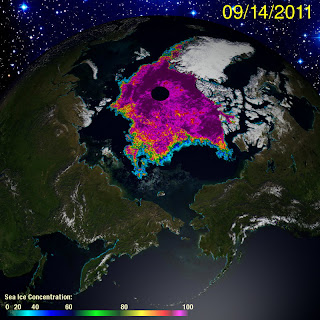 If this is the minimum (and there is some chance that the coverage could yet decrease), this would be the second lowest of the satellite era and four percent above the minimum coverage of 2007. Here is the comparison from NSIDC: 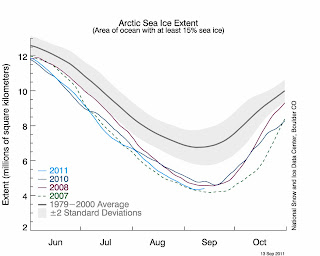 The University of Bremen made the news earlier this week with the report that sea ice coverage was lower than 2007. NSIDC and Bremen use different procedures and datasets (the Bremen data has higher horizontal resolution than NSIDC). However, the main point is not whether 2011 was just above or just below 2007. The message is that summer and autumn sea ice coverage continues to rapidly decline and that 2007 was not some "fluke", the result of some rare combination of weather.
Posted by Rick at 9:14 AM