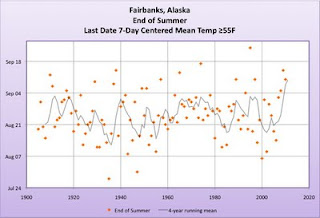 With the foliage now rapidly turning to autumnal reds and yellows, thoughts turn to the end of summer in Interior Alaska, and the question arises, are summers ending later than in years gone by? Of course, I have a chart for this question.

Since a couple of cool days does not autumn make, I've defined the end of summer as the last day in the season when the 7-day centered running mean is 55F or higher. From the plot at the left, it is clear that at least until very recently, there was no trend at all. However, the gray line is the 4 year running mean, and it has, just in the past few years, popped up to the highest value in the century of instrumental records. Through September 1, this summer is already beyond the mean date for the past 40 years, and if the forecast for the next few days works out, this will push this year's "end of summer" later still.

It is very tempting to pin this recent and dramatic change on the loss of sea ice near Alaska, though we need some modeling of this idea.