More on No freeze

Continuing on the topic of first autumn freezes, here's a plot of the date of first freeze at Fairbanks Airport. 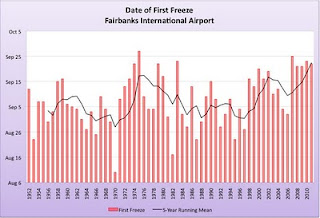 Obviously, the date of first freeze has not been consistently so late in September anytime in the past 60 years. Also note the increased frequency of very late dates since 1997. Suspiciously, this corresponds to the advent of the switch to the ASOS. However, this can only be (at most) part of the story, as this plot of the date of the first freeze at the College 5NW co-op site shows: 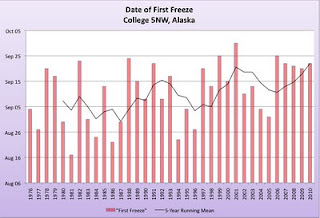 College 5NW is the longest climate time series we have for the Fairbanks area hills: it is about 450' MSL above Goldstream Creek. This is not quite an apples to apples comparison: in a few years the date of first freeze at the airport is from the temperature dropping to or below freezing in the late evening, while College 5NW has had an observation time around 8am for most of the period of record. Still, while College 5NW has sometimes had late dates through its period of record, the consistently late dates since 2006 again stand out as unprecedented.
Posted by Rick at 11:21 AM