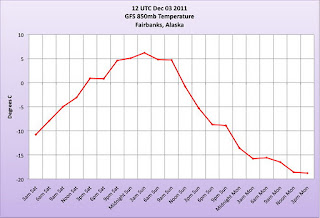 Here's the 850mb temperature forecast for Fairbanks from the 12Z Saturday GFS. It is quite similar to yesterday's run; warm in the morning (no chance of record though as this is the anniversary of the great 1934 chinook); the cold front is a smidge faster, coming through during the afternoon followed, by about 12 hours of snow and 24 hours of gusty west to southwest winds. It's not out of the realm of reasonablity that there could be a little freezing rain right at the start, but it would not last more than minutes before changing to snow.
Posted by Rick at 11:09 AM