It's a White Christmas 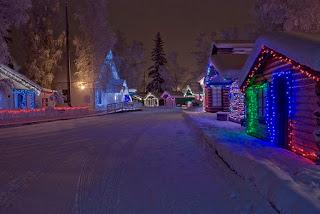 To no one's surprise, it's another white Christmas in Fairbanks: snow depth at 3am Sunday was 12 inches (photo of Pioneer Park in winter from Bootsnall.com)

But there was once a Christmas that was not white. The autumn of 1934 was unusually dry and mild, and the few inch snow cover was sublimated/melted away in the super chinook of early December, when the temperature reached 50+ five straight days. After the chinook ended it remained dry. There was just over an inch of snow December 9-12th, but by the 15th there was only a trace of snow on the ground. There then was no precipitation at all until the day after Christmas. Ironically, the late winter of 1934-35 turned out to bring much above normal snowfall, and April 1935 was quite cool. As a result, the winter snowpack, after being reestablished on December 26th, did not melt out until May 8th, one of the latest dates for the spring snow melt of record.

Although snow depth data is sketchy prior to 1929, what data there is strongly suggests that this is the only "brown" Christmas since the founding of Fairbanks in 1901.
Posted by Rick at 11:29 AM