Fairbanks Airport reported a peak wind of 51 mph at 1021AM Monday. Gust data is only available at Fairbanks since the mid-1980s, but since then this is the highest gust of record for December. The previous record was just 38 mph on Christmas Eve 1985.

Here is a plot of winds from the NRCS SNOTEL up on Eagle Summit at Mile 107 Steese Highway (elevation 3750' MSL). Winds between an ASOS/AWOS and SNOTEL are not directly comparable, but you get the idea. The anemometer often ices up on Eagle Summit, but evidently not today. 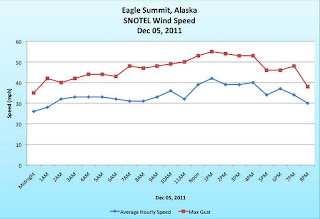 It's been a really windy day up there! The highest gust has been 55 mph, and a quick look shows nothing that high in the past couple winters (50 mph was the highest reported in the storms last February)
Posted by Rick at 8:18 PM